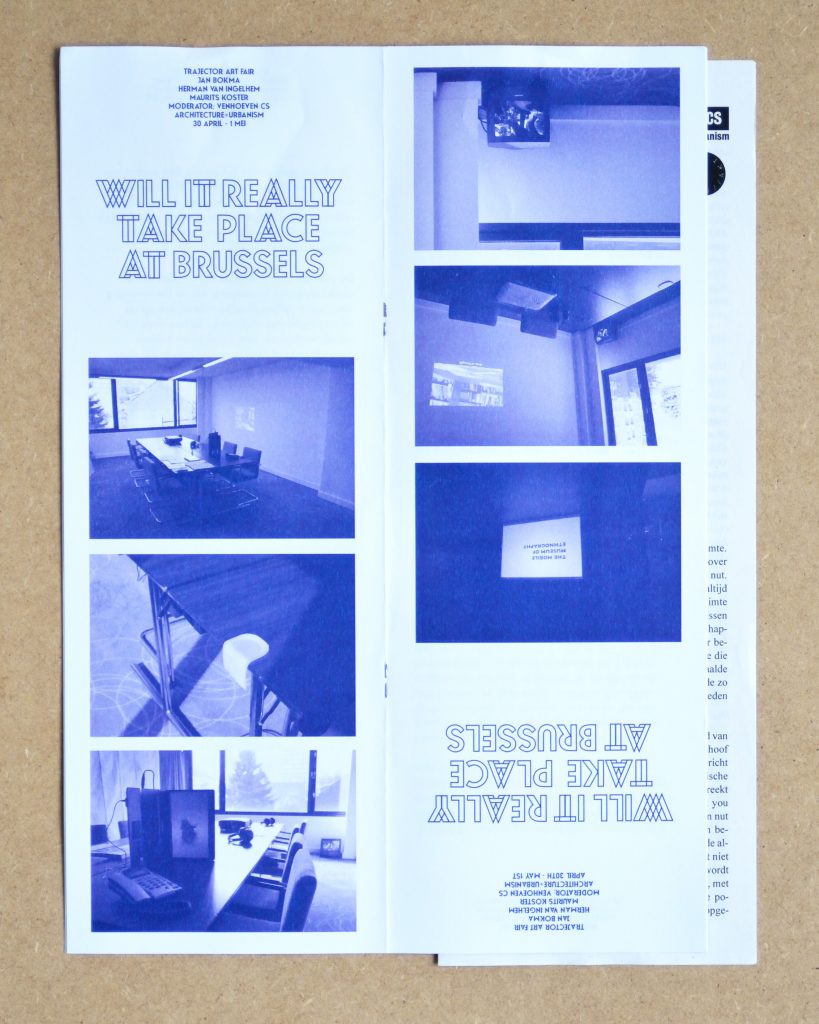 Will it really take place is the second edition within the current presentation format on art as a Mental Space. Art (or P/////AKT) as a mental space consists of a serial solo presentations, each triology connected to a specific focus-point is connected to the previous or coming series. Moreover, each series is involving a moderator as a fourth participant. The role of this moderator is to follow the process and to generate conclusions, output and / or new ideas.

The format started in the Fall of 2010 with Space is a Word (on language and architecture in a wider sense) as a proper basis. Gino Saccone, Jean Bernard Koeman and Frederik van Simaey each presented their view on the connection between art, architecture and language. Moderated by artist Hedwig Houben. From this perspective on the construction of visual language and its architectural implications the series have moved on to the ever shifting relations between (art) object and (art) space. Will it really take place features Jan Bokma (Rotterdam), Herman van Ingelgem (Mechelen) and Maurits Koster (Amsterdam) who were invited to address such issues as the activated relation between the artwork and the audience, the nature and status of the object within a specific context and the position of the artist, his possible practice and career as seen from the institutionalized domain.

Amsterdam-based office VenhoevenCS architecture+urbanism were asked as the moderator, specifically because of their ability to shift between different languages and modes of reasoning within (and outside) the field of architecture. VenhoevenCS operates on all scales and, more importantly, on the basis of conceptual and philosophical notions. Therein art (often actively implicated in their work) is seen as an essential part of cultural development at large. The conclusions of VenhoevenCS were presented mid-term during Will it really take place at Brussels (a small summary of the project during Trajector Art Fair in May).