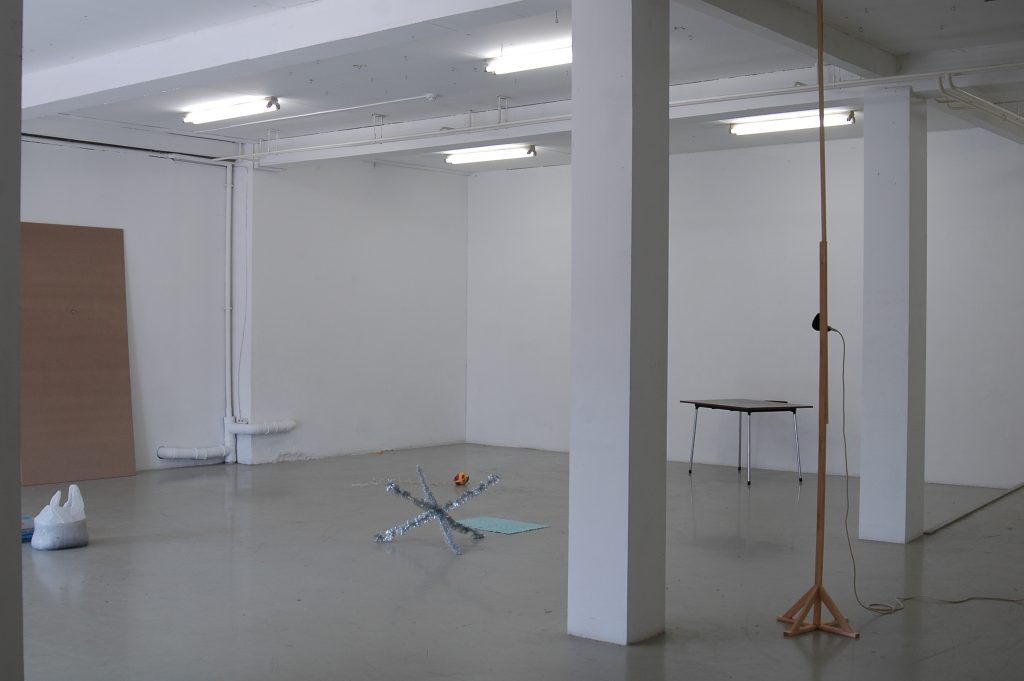 According to Herman van Ingelgem (Mechelen, BE) products and objects have the ability to commute between one reality and another. Especially those that are generally perceived as banal or in themselves rather uninteresting, may turn out to be surprisingly flexible about their status and meaning.
When -for instance- a table, a slice of cheese or a battered soccer ball are taken out of their original surroundings and introduced into a specific type of art space something will happen.

On the one hand there is of course the familiar shift in status: from insignificant object into an art work with certain formal and conceptual qualities. But there is more to consider. Actually Van Ingelgem expects more from his objects than simply to be present as ‘ready-mades’. Or rather, it is precisely our supposed familiarity with these “things” that he wishes to address. “These objects are unpretentious . They have made themselves utterly known in the course of time and their relation to us seems pure and straight forward. This creates an opening to generate meaning in an alternative way. By shifting from one reality into another they are able to make certain themes sensible.” A piece of construction material, obtained from a nearby shop will be valued differently within a museum collection than as part of a temporary installation in a slightly rough-around-the-edges project space. In the case of P/////AKT moreover, such exhibited construction materials may just as easily refer to the specific situation and transformation of the space itself: located in a building that used to be a paint company, on a small industrial strip of hard-ware stores and on the fringe of a formerly “bad” residential area which is currently undergoing a process of gentrification. And how does this relate to the other works on display? All of them, either taken from a store, the P/////AKT storage or the artist’s home have also led some sort of previous life, even if only that of a product that was selected and taken from a shelve. The exhibition is an installation of individual sculptures with a performative character that can be read in different constellations. As a title Shuffle indicates the sound that is generated from physically shifting things around. A “white noise” that, as far as Van Ingelgem is concerned, also exists in a mental, spatial or contextual sense and that is evoked through the act of looking and reconsidering the space, the objects and everything in between. Shuffle is the second part of Will it really take place, the second trilogy within P/////AKT’s format on art as a Mental Space. Will it really take place focuses on shifting contexts between the art object and the art space and is moderated by VenhoevenCS architects.