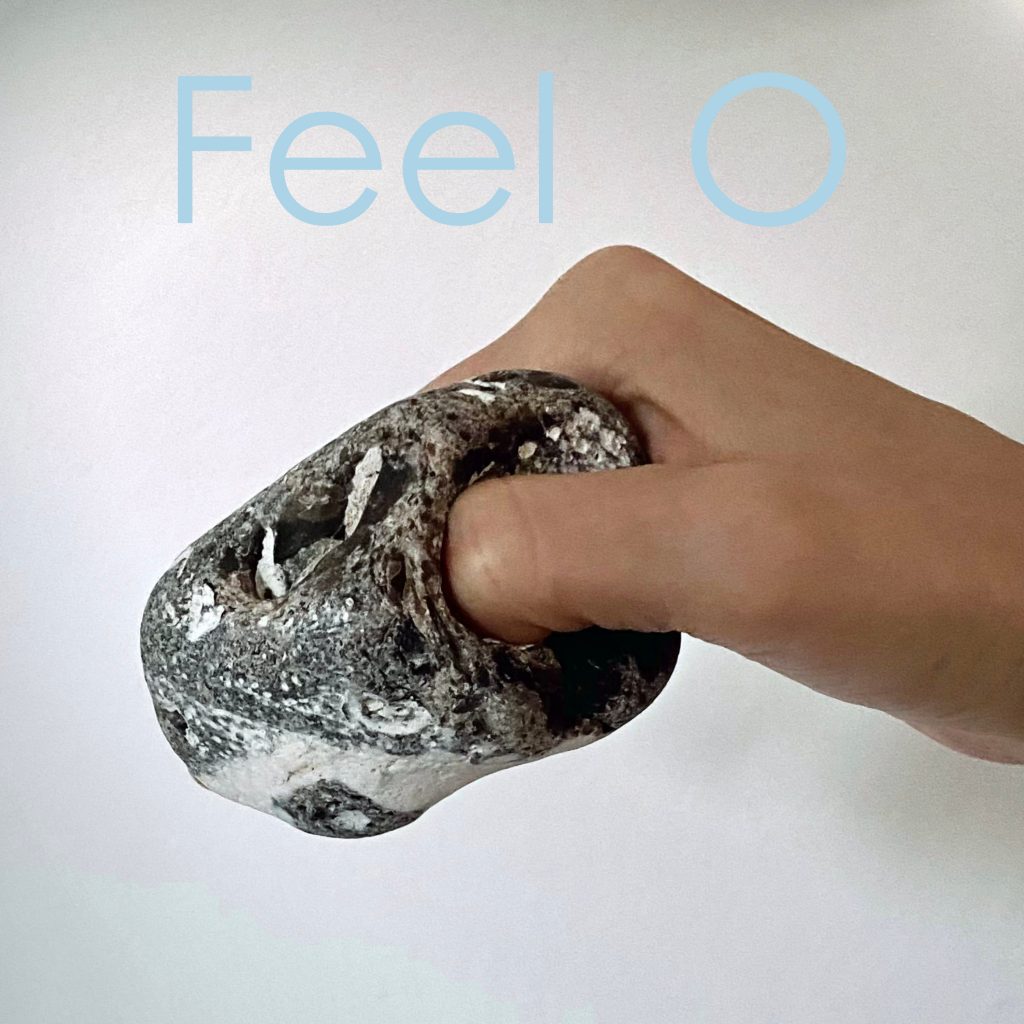 It started with a hole in a stone, worked in by the seawater over time. A material associated with hardness, stability, steadiness, is persistently eroded by something soft and flexible. This process isn’t visible, but can be recognised by the presence of the hole (or by the signifier O) as its current state.

Note: Historically, water and its still surface also served us as the first mirror. As a material water also stands for self-reflection.

I am wondering if it’s a matter of locating, finding the stone with the hole on the beach amongst all the other stones.

When I think about where I am – where we are standing – I find myself displaying optimism. This is probably some sort of survival strategy. Does this optimism really have something to do with the persistent belief that everything will be fine or is it a way of seeking shelter in nostalgia? (Not sure if nostalgia is the right word.)

On one end of the space there’s a projector emitting the blue light of its own standby mode – referring to the time in between operative states or an anticipation of occurrences.

An aluminium sculpture sits in front of it. It looks like a rib cage with a peach-coloured glass object at its centre (this has the shape of a stone with a hole in it). Its surface is reflecting the environment.

To the right, a video is projected onto the floor. The shape of a heart in the water. It might no longer be there after the next wave coming in.

I’m always fascinated by the element of water. As it reflects (a pollution of the sea and the surface) a mirror image of us.

There’s a fountain at the far end of the space. A structure that seems to be drowning, but it still stands.

Note: viewing and recognition form the basis of understanding and can therefore be the breeding ground for change. The process as a metaphor, stands as signifier O (for Our Times) and is asking me/us what must happen to change conditions, to loosen rigid structures.

In order to fill the void, absence must first be recognised.

(Feel a Hole with an Eye instead of an I)

Sarah Pichlkostner (1988, Austria) creates sculptures and environments through which she investigates the representation of invisible processes: the transmission of energy, the passage of time, and our psychological responses to materials and things. Or as she puts it: when material is brought to an object, i.e. is made into one, and the function of this object is continuously developing over time, then the object is ultimately reflecting us.
Pichlkostner currently lives and works in Fletching and is represented by Josh Lilley (London), Annet Gelink (Amsterdam) and Galerie Hubert Winter (Vienna). She studied at the Academy of Fine Arts in Vienna and was a resident at de Ateliers in Amsterdam and ISCP in New York. Solo and groups exhibitions include Galerie Huber Winter (2020), Josh Lilley Gallery (2021, 2019, 2017, 2015), Lustwarande (Tilburg, 2018), P/////AKT (Amsterdam, 2018), Annet Gelink Gallery (2018, 2015), Ketelfactory (Schiedam, 2017). Her work has been presented in one-artist booth at Artissima Fair in Turin and Vienna Contemporary fair (both 2017) and FIAC in Paris (2015).