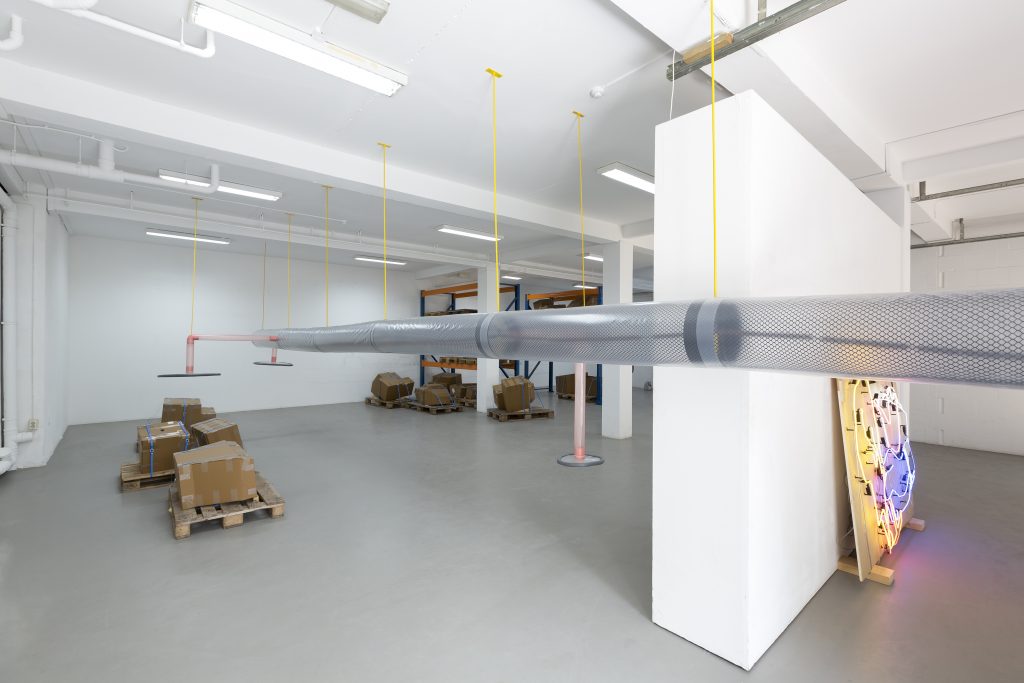 Less than 70 kilometres from the exhibition space is a landscape in which there sit a few very particularly shaped building blocks of red sandstone that arrived there a hundred years ago. They have entered the space in the language of modern logistics – the kind of containers you would expect most of the products that travel this world currently are housed in. It’s a language so familiar and basic, it’s almost dull: The surface of brown, recycled material, the wavy layers of paper sandwiched in between, curvy edges, dented corners, coloured straps, labels written for devices or a professional knowledge. It is its ubiquity which makes it a language. We know what to expect and what diverts from expectation – the building blocks require an odd grammar.

Nicola Arthen is an artist based in Amsterdam and London. His practice is an investigation into the mutual relations between objects’ and humans’ capacities, a negotia- tion between site and experience. He is interested in the dilemma that occurs in things entering an art space. By isolating artefacts in their peripheral state and turning them into protagonists, he is invested in their stories, struggles and unique qualities, as well as the poetics and politics of labour to reproduce these. He focuses on unexpected encounters in systems of standardisation—the trace of an individual’s hand or personal considerations in a serial product: a makeshift, cobbled up water-meter, a rhythmic assembly line choreography to cope with the machines’ pace, a hesitation in a computer-generated voice. His work takes the form of installations and time-based mediums, often contributing to a moderated spatial environment.

Nicola Arthen’s show at P/////AKT marks the second part of the exhibition program Am I an Object. The program – that will run until March 2022 – is further featuring projects by June Crespo, Tako Taal (in collaboration with David Dale gallery, Glasgow) and Suchan Kinoshita. It will be responded to in writings and events by students from the Sandberg Institute Critical Studies Department. Alec Mateo and Benjamin Schoonenberg are taking care of the first two sessions.

The Artist’s Library is a growing collection of titles that have, in one way or another, been relevant to the artist’s practice. They will be on view during the exhibition and become part of the P/////AKTSALON collection of books afterwards. This resource expands on ideas raised through Arthen’s exhibition, for which he included:
– Ghislaine Leung, Partners, Cell Project Space, London, 2018.
– Cooking Sections, The Empire Remains Shop, Columbia University Graduate School, New York, 2018.
– Johannes van der Wolk, De Kröllers en hun architecten, Rijksmuseum Kröller-Müller, Otterlo, 1992.

Audio Installation in collaboration with Adrian Sölch.
The artist would like to thank FitThings and Mondriaan Fund for their help and support.