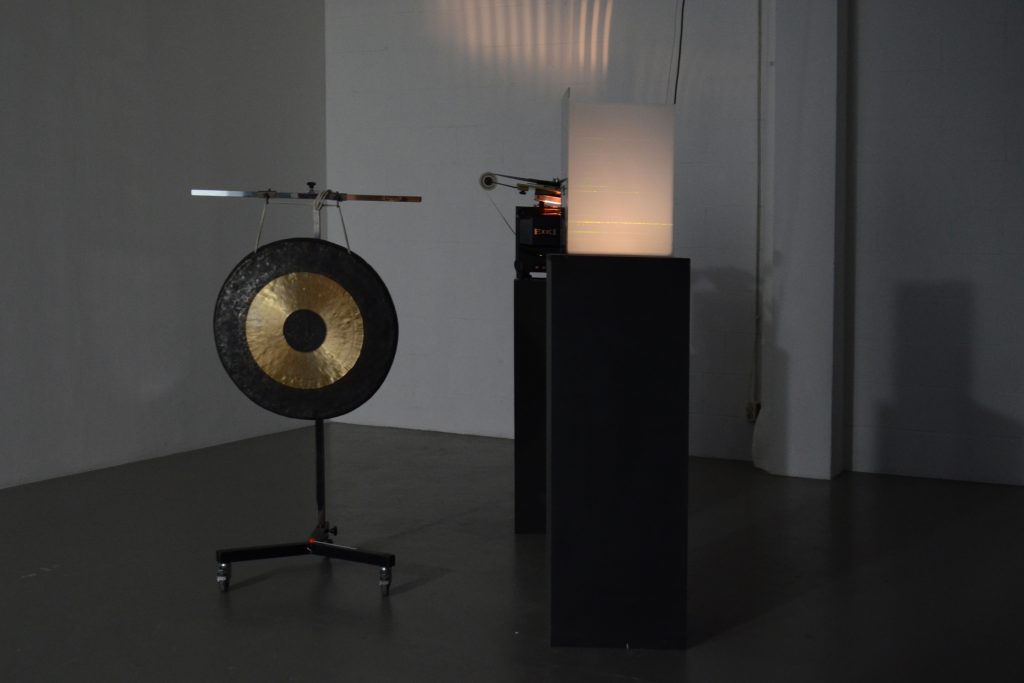 Through sounds and speech, Nickel van Duijvenboden and Marie Nerland want to introduce a vocal and acoustic element in Katja Mater’s exhibition. Though silent, her installation is not exactly without sound. In addition to the distinctive rattle of projectors, her acts of writing and use of light and layering seem to hint at processes of internal speech and hearing, subvocalisation and synesthesia. Meanwhile, the partitioning of the space into odd-shaped rooms lends itself for an echolocation.

The mirrored texts and their dyslexic overtones call to mind questions of notation vis-a-vis auditive internalization, not only in understanding text but also in music. There are multiple ways of understanding, and one is not privileged over the other. Both sensibilities are equally subtle, equally intellectual.

Marie Nerland and Nickel van Duijvenboden have collaborated before on two performance projects, Signposts at Hordaland Kunstsenter in Bergen (2018) and Signposts Tromsø at Small Projects in Tromsø (2019), both involving silent pedestrian drifts punctuated by parts from correspondences that they read aloud. In these works, letter-writing plays a role both as an echoing device and a form of monologue.

Marie Nerland is an artist and a curator. She has been working with different collaborative performance-based projects. One of her most recent projects was a lecture performance at Landmark, Bergen Kunsthall. In 2008 she founded Volt, a long-term curatorial initiative that commissions and presents new projects by contemporary artists in Bergen. www.marienerland.no

Nickel van Duijvenboden has been active as a writer, visual artist and most lately as a singer. His preoccupation with the written correspondence and the discovery of voice have destabilized his relationship with art. He is currently finishing a project called Post, consisting of an artist’s book, a record and a film, which details this process. At P/////AKT in 2017, Nickel collaborated with Gwenneth Boelens on a spatial sound installation called Echolocation: Nocturne. www.nickelvd.nl