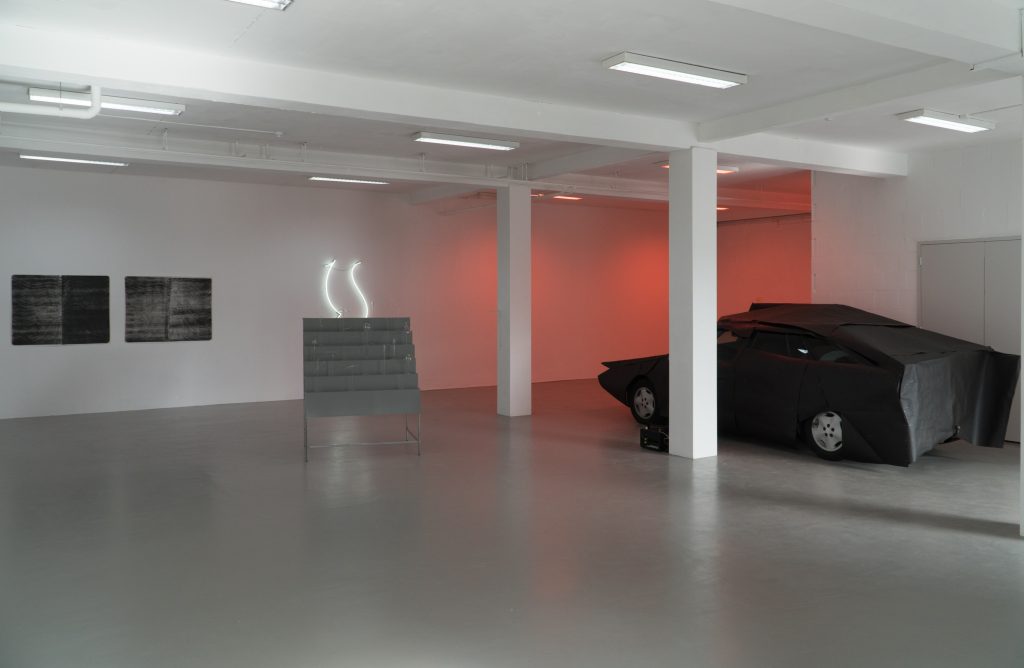 Today is the Color Day Meets at Day is a duo show by two distinctive Lithuanian artists – Laura Kaminskaite and Antanas Gerlikas – who despite having worked with each other throughout their respective careers, have never exhibited together in such a scale before. Kaminskaite creates invisible events through objects and language, creating exhibitions, scenarios, and narratives in the minds of viewers, readers, and listeners. Her work gives more than meets the eye of the beholder, faintly challenging the latter’s perception of its surroundings by the subtlest of means. The works of Gerlikas, on the other hand, create an impression of objects that arrived from the spaces of dreams, unaccountable coincidences, or the short moments when a master of a certain craft gives up the control of his technique and instead gives himself up to the uncertainty of the abyss. It seems that the materiality of these objects, although sometimes monumental, is only a temporary feat that the artist managed to grant to them.

No doubt, there’s a slight chance we all might get lost in translation between these two peculiar artistic languages. The show was conceived as a gift that turned out to be challenging at times, becoming its own doppelganger at others – a faithful memory of a dream directed towards the future. It contains pieces that were lurking around, waiting for the right moment, works that would not have seen the light of day in any other circumstances, others that are still waiting for their names and those that trick one into believing one knows them already.

The show was first conceived back in 2017 when Audrius Pocius, a curator from the Contemporary Art Centre in Vilnius received an invitation from P/////AKT to curate an exhibition for their on-going Extended Matter series. Much like the previous years, Extended Matter is a series of connected solo exhibitions with additional output in the form of texts and events. It loosely deals with renegotiating or reconciling the boundaries between different domains and the possibilities of creating an alternative, morphed or in between reality, conceived by (slow) production processes, transformation, tactility and materiality.

On the occasion of the exhibition, both artists are presenting their respective books: Dunes by Antanas Gerlikas and Ghost Bag by Laura Kaminskaite (www.blunt.cc).

The exhibition is produced in collaboration between P////AKT and the Contemporary Art Centre in Vilnius and is presented by the Lithuanian Council of Culture, the Mondriaan Fund, the Amsterdam Fund for the Arts and Ammodo.

Special thanks to: Cees Laan and Keez Duyves / PIPS:lab.