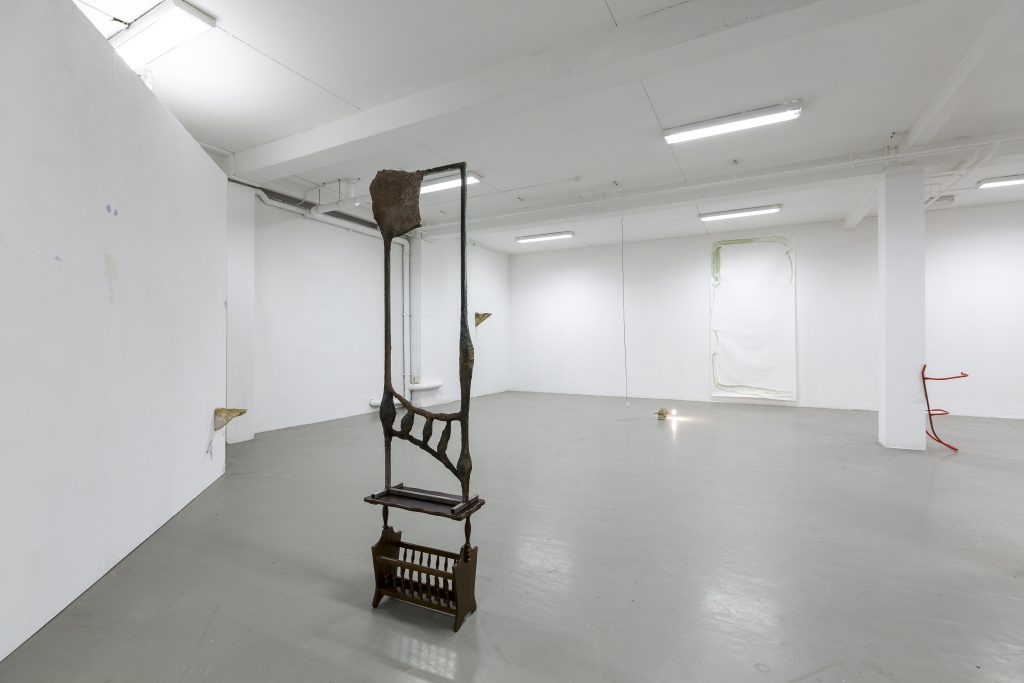 Francesca Ferreri’s solo exhibition at P/////AKT is part of DRAWN ONWARD, an exchange project with Progetto Diogene in Turin (IT). During the four-week residency period leading up to the exhibition she has been working inside the space, translating her research into an installation of new sculptures and drawings. Her dialogue with the space, which has been dictated by exploring its potential, is based on the notion of the historical grottesche (a type of mural painting from the roman period). Ferreri considers these to be an early example of a site-specific working method, applied by her in order to verify how today it can actually be seen as a model for spatial organization. In the grottesche, the various proportions and positions of the figures are determined by the characters of the surfaces on which they are displayed, meaning that they are shaped, or even ‘deformed’ according to a canon that was meant to make several anthitetical forces compatible. Variations and repetitions, predetermined frames and sinuous freedom are eventually incorporated in a formal system that is both reinterpreting and confirming the given architectural structure and possible further subdivisions of the spatial context. Ferreri aims to apply these spatial principles – which in the grottesche functions as ‘invisible’ regulators – as a source for defining sculptural forms as well as the whole layout of the exhibition itself. According to Ferreri, the grottesche as a reference model is also related to brain functions – another subject within her research – such as memories, the unconscious and dream.

Listening Essays are two portraits, or rather outlines of facial features, on large paper sheets. By adjusting the proportions to the height and width of the paper, they are almost abstract, but still reminiscent of an original subject. The drawings are – only just – limited by the dimensions of the two-dimensional surface of the paper sheets, which in turn relate to the height of the walls and columns. Another work (untitled) also gives evidence of the interplay between architecture and image, in this a case a found object in close encounter with a pillar, which is literally embraced by it. Capitello is a playful allusion to classical architectural elements, incorporating ceramic fragments and reinforced plaster, materials that Ferreri is also using in the other works in the exhibition. Like an introduction, it invites the observer to have a closer look.

In Fuzzy Traces a different order reigns, which ignores the regular perspective and doesn’t seem to be interested in the actual dimensions or distinction between beings, guiding the spectator through references and allusions and inviting him to explore the genesis of a false memory.