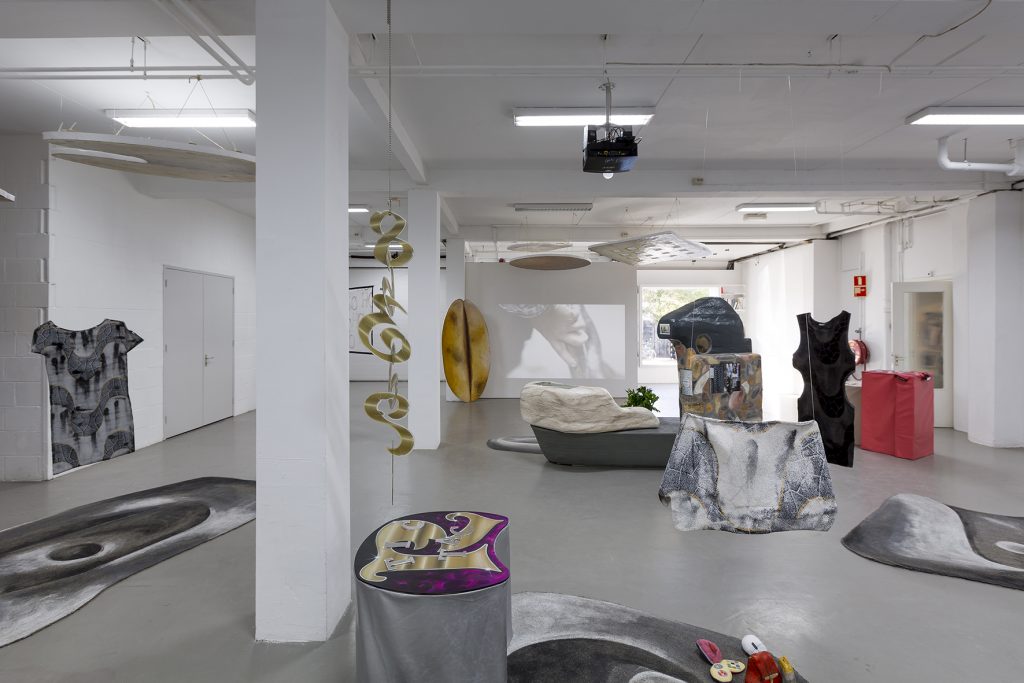 For Placing a mirror at the entry area is a gracious way to welcome wealth in Ana Navas brings together three groups of works that she has recently been working on. While these three lines of work may slightly differ in focus as well as the specific working method underlying their physical outcome, they all give evidence of her’ interest in the processes of copying, translation and assimilation of – what at large may considered to be – commodities.

The title of the exhibitions seems ironic, especially since the works appear to question their own status of being art. One of the series for instance, is deliberately produced as non-art: as display solutions, or rather, adaptable modules (a “reference bench” for instance) for the exhibition architecture. Moreover, Navas has a flair for making her works appear sort of clumsy and strange; obviously handmade, but questionably successful attempts at first sight, as is the case with the series of towel-paintings in the shape of clothes and the accompanying, fictional fashion campaign on their branding.

If art is a commodity, it is still considered to be one of a different, more distinctive level than for instance breakfast cereals and (to a lesser degree) high-end fashion items. It is not so much the question whether art is a commodity, or what distinguishes art from non-art, that Navas seems to address however. The third group of works is based on forgery and imitation, which is conceived as being closely related to making art and how it is perceived. They are based on instructions that can be found on the internet; on how to recognise the real thing from the counterfeit by certain tell-tale characteristics and mistakes and thereby addressing issues that are equally relevant to the creative process resulting in artistic production. In other words, to understand the errors within the process as possible creative moments, to question the relevance of something being the real thing or an original, to try and define quality.

Navas’ installation is neither attacking nor defending notions of commerce, constant reproduction and falsification. In the end, everything is a real thing in its own way and the questions raised are the result of shifting contexts – the social and artistic, each with their own, but perhaps not all that different, visual vocabulary – back and forth.

Pense-Bête V
In 2016 P/////AKT is focusing on the conceptual legacy of Marcel Broodthaers’ 1964 work Le Pense-Bête and its relevance in current discourse. P/////AKT has outlined six aspects of this keywork, each of which comprises a solo exhibition, a public event and an essay. This fifth edition is focusing on the role that context plays concerning value and status.