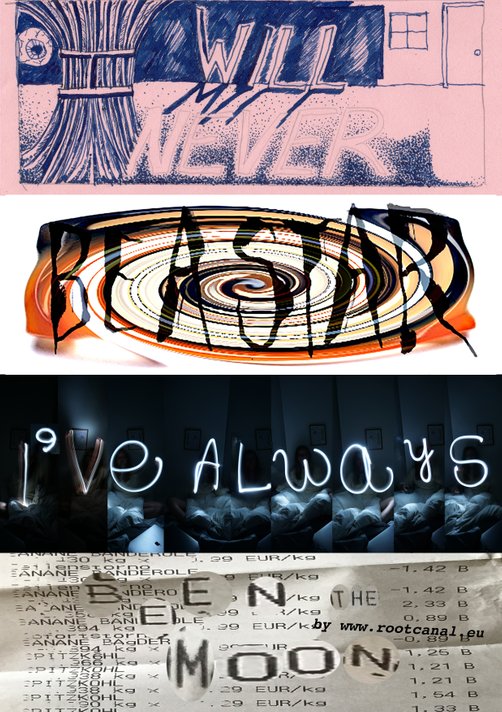 Fourteen artists, musicians and writers were invited to contribute to the mix tape I’ll Never be a Star I’ve Always Been the Moon, initiated by the artist collective Root Canal. As a constructive answer to the difficulties of organizing physical exhibitions in the past year, the mix tape is recorded on classic tape cassettes, which are sent out to potential listeners and bring a group exhibition to their homes. Every contributor received carte blanche for the content of their recording, with the sole restriction that it could not be longer than 5 minutes. The resulting mix tape is an eclectic amalgam of contributions ranging from spoken word to noise poetry to dream interpretations, alternated among others with Finnish rap, garage punk and cover songs.

Root Canal consists of the artists Anders Dickson, Frieder Haller, Henna Hyvärinen and Thomas Swinkels. In 2017, they started their exhibition practice in an attic in the east of Amsterdam where the four lived together. Upon leaving their attic space, the initiative has continued to exist nomadically. They curated exhibitions in various unofficial but invaluable exhibition spaces locations, such as a camper van, bedrooms, a gallery basement, as well as at the Vleeshal Center for Contemporary Art, Middelburg, NL.