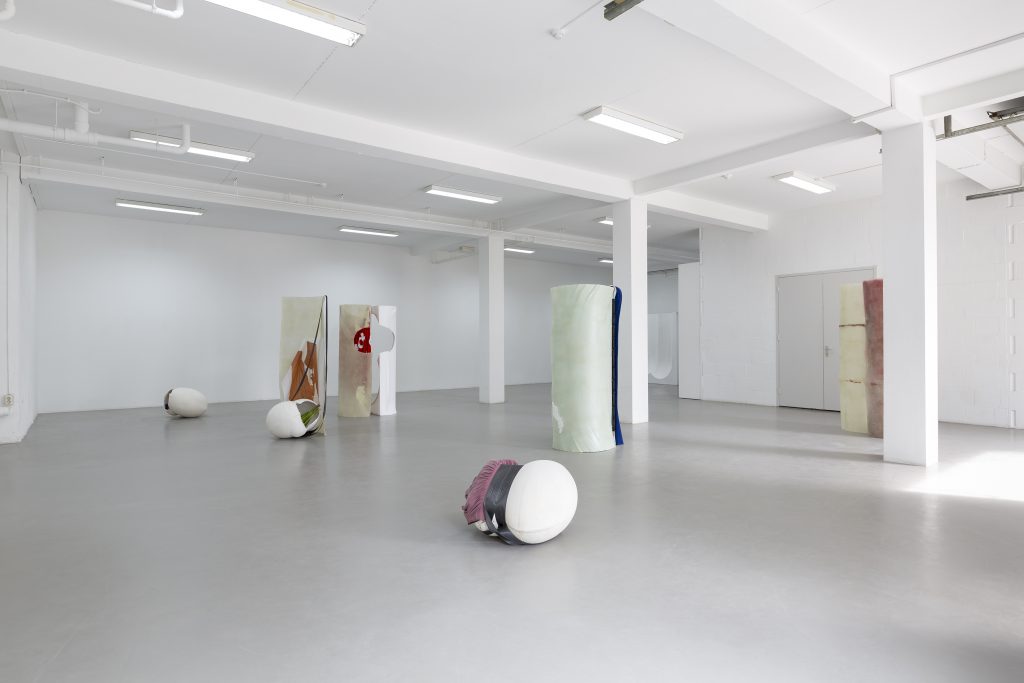 June Crespo is conducting research with a particular focus on the relationship between the body and its representation. (…) The starting point is a shape that can be traced back to the body, but the investigation leads in different directions, constructing forms that allude to other things as well (…) a sensual analysis of contemporary models of representation, commenting on the actual and symbolical dynamics enveloping the body. Crespo’s interest in the concrete and corporeal conditions of the object/body, as well as in the immaterial contexts where it circulates and shifts—as seen in her recurring interest in figures such as conductors and vessels—questioning contemporary life’s composite configuration made out of material and discursive dynamics. In a moment in which visual culture is dominated by stylized and hyper-perfect portraits, the work challenges homogenous approaches to the corporeal, proposing dissident images that liberate our gaze and our bodies themselves.*

As Crespo likes to work quite intuitively her approach for the project at P/////AKT has been decidedly open – just two molds and a mental baggage of older unexecuted ideas to experiment with. Other materials (large blocks of Styrofoam, textiles, resin, flowers) began to arrive at the space since her own arrival early August. Since then, things have been very much in progress. Or rather, in a process that is based on, and executed as, an investigation towards a state of transformation or in-betweenness.

A space and an artist working inside it, molding and casting, fluids solidifying into objects with an outside and an inside, things that are hard and things that are stretchy, the body and the object, the subject and the object, the chicken and the egg. The answer to the question of what is leading can, for the time being, only be answered by trying to find the right tension and watching things transform into a state of ambiguity.

June Crespo’s show at P/////AKT marks the third part of the exhibition program  Am I an Object. The program – that will run until March 2022 – is further featuring projects by David Dale Gallery, Glasgow and Suchan Kinoshita. It will be responded to in writings and events by students from the Sandberg Institute Critical Studies Department.

The Artist’s Library
The Artist’s Library is a growing collection of titles that have, in one way or another, been relevant to the artist’s practice. They will be on view during the exhibition and become part of the P/////AKTSALON collection of books afterwards. June Crespo highly recommends:
– Lucy Lippard, Eva Hesse, Da Capo Press, Boston, 1992.
– Clarice Lispector, Complete Stories, Penguin Books, London, 2015.
– Lucy Lippard, Eros Presumptive, “The Hudson Review”; Spring 1967; 20, 1; Periodicals Archive Online pg. 91.
– Cindy Nemser, An Interview with Eva Hesse, first published in ARTFORUM, 1970, available on www.hauserwirth.com