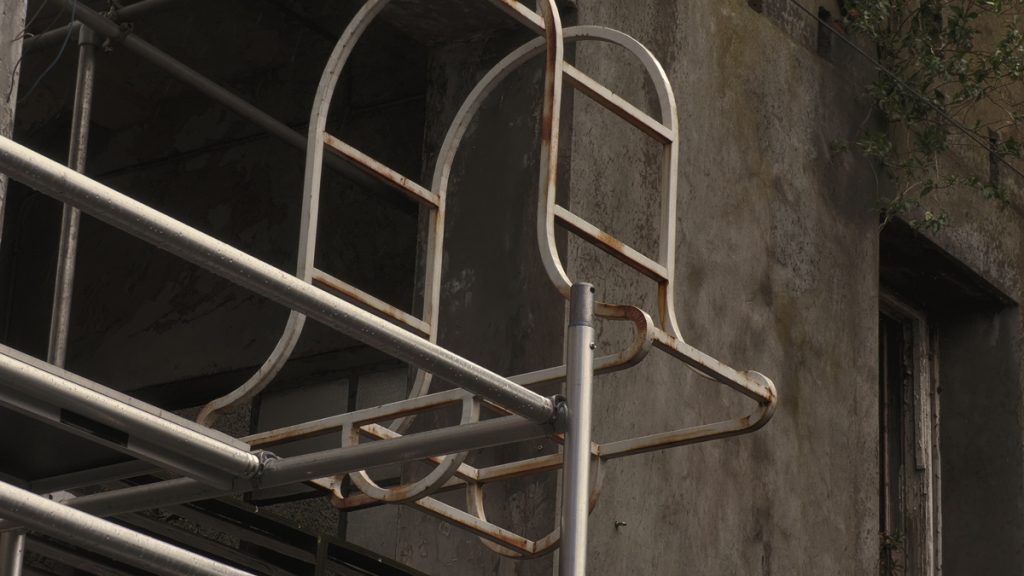 Sadly we have to close the exhibition one day early, meaning we won’t be open on Sunday 19 December. We will welcome you again in 2022.

I really liked the photoshoot
scenes.
[…]
It reminds of the scene in sex
education when they go to the
junk yard to smash things up.

“Playing with disjointed rhythms, non sequiturs, and hidden rules of an unknown game, “Like clock” is akin to a sleep-deprived version of a children’s game-show. Or, tuning in halfway through a dramatic sitcom finale with your telly muted. It’s joyously bewildering.”

It feels like a bit of a leap in lots of ways. In terms of the work I’ve seen by you, the humans feel much more like performers. I thought of lots of other things I’ve seen while I was watching (Paul McCarthy, some older Aernout Mik, even David Lynch) but it’s very distinct: strangely (semiotically and spatially) claustrophobic and abject in a very particular way. I guess the incorporation of media systems is quite pronounced. Everything felt like it was folded into everything else in a profound way. The constant play in scale and context magnified that. Most of all I was thinking of a breakdown in systems of categorisation, like that’s what was being enacted over and over again.

, the woman does air handshake, the mirror and the handheld monitor during the fotoshooting, two times closing the squeegy door after kissing, ‘plenty and penalty’, ‘we see, lets see’, the blindfold bird and the photos of a pigeon, the two mini shirts, even multiple Amstel beer cans, two two two, pair up and beyond, it starts to feel like there is a split millisecond of chance is being given. Then the microphone dropped in the water.

It reminded me of Tango1, some kind of fucked up version of it. also the sound had this weird quality of being so detailed that becomes external to the visual, like imported. Domesticity inside out like a dirty sock.

Red button becomes retrieval scheme. “But its gaiety was like the deafening voice; merciless, made of tin, and mad.” There may [question] be time for the clock, the clock [question] may make time for itself;

Like clock is a work made up of multiple borrowed and familiar aspects, assembled on its own terms. The essential premise would seem to be about staging a gathering-together in a place that appears to have its own rules.”

Commissioned by David Dale Gallery, selected for and supported by Glasgow International 2021 Across the City. Supported by Mondriaan Fund, Amsterdam Fonds voor de Kunst, the Embassy of the Kingdom of the Netherlands, Creative Scotland.