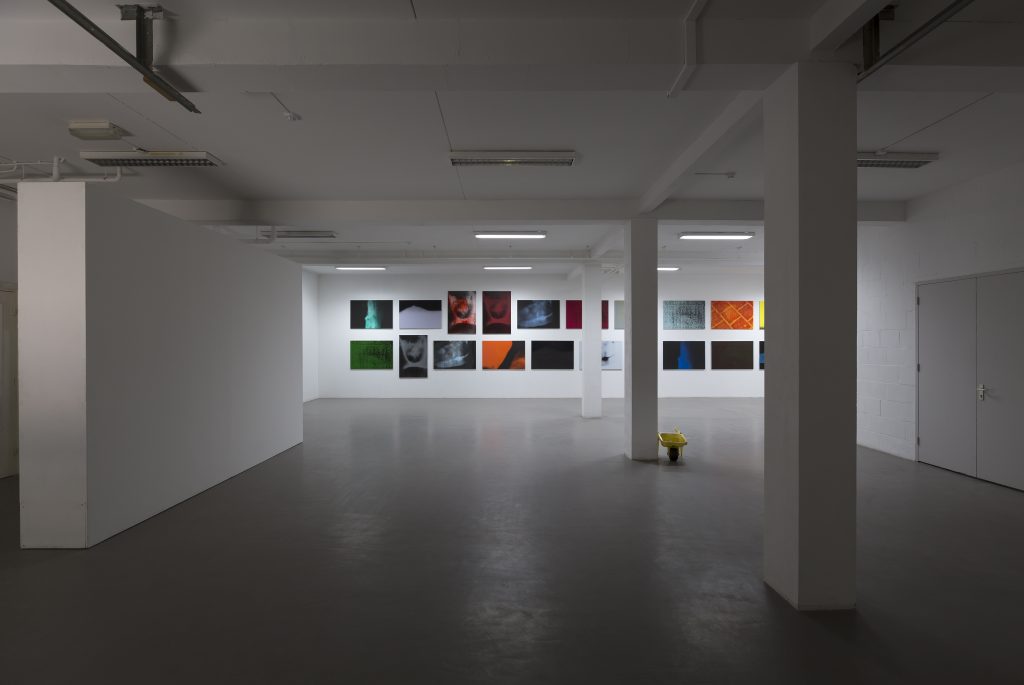 Something oily, the smell of sweat, thighs stick together. The seams of earth between the heated asphalt slabs. Each screen seems to capture a moment of afterglow; a slow cooling down.

Infrared sounds warm, reminiscent of an incubator lamp. Although in this case the warmest spots on the images are those that tend to lose all color. Like the snow on the roof of a heated but badly isolated house. The camera has to constantly adjust itself, to measure the surfaces again and again. Everything, also that which seems lifeless, is constantly pulsating and pumping.

The image has to push itself through a fine-meshed net. Particles separate themselves and find each other again on the other side, on another surface.
(S. says that the bodies on the images look like power plants, inside of which warmth is produced that radiates to the outside.)

Transformation is supposed to occur inside the object. Where is the inside? Does one encounter it in the matter, while it is worked, moved, pushed against its grain – while something is done to it? The order of things. A possible sequence: word, thing, materiality… appearance.

Christine Moldrickx’ exhibition at P/////AKT marks the beginning of a new series of solo endeavours. Am I an Object will run until March 2022, is further featuring projects by Nicola Arthen, June Crespo, Tako Taal (in collaboration with David Dale gallery, Glasgow) and Suchan Kinoshita. It will be responded to in writings and events by students from the Sandberg Institute Critical Studies Department. Alec Mateo and Benjamin Schoonenberg are taking care of the first session.

New feature:
The Artist’s Library is a growing collection of titles that have, in one way or another, been relevant to the artist’s practice. They will be on view during the exhibition and become part of the P/////AKTSALON collection of books afterwards. Christine Moldrickx highly recommends:
– Chantal Akerman, My Mother Laughs, Silver Press, London, 2019.
– Laurie Parsons, A Body of Work, Städtisches Museum Abteiberg, Mönchengladbach, 2018.
– Chuck Smith, Forrest Bess: Key to the Riddle, Powerhouse Books, New York, 2013.