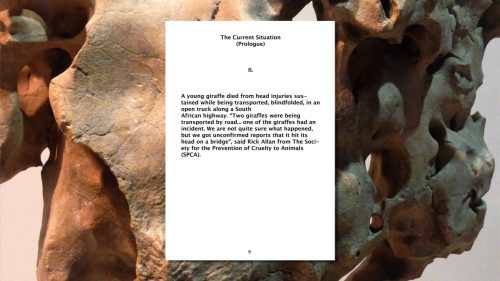 Portuguese artist Pedro Barateiro, who’s solo exhibition at P/////AKT is
still on view until Sunday 12 May, will present and discuss his practice
through two of his more recent films: ‘The Current Situation’ (2015, 12
min) and ‘The Opening Monologue’ (2018, 15 min). Afterwards Monika
Szewczyk and Barateiro will engage in an informal conversation and Q&A
with the audience. Before and after there’s time for a drink and a visit
to Landscape with Bear, De Appel’s current exhibition, which will stay
open until 9 pm for the occasion.

In ‘The Current Situation’ (2015) the narrative starts with the
description of two events happening simultaneously, the cutting down of
a palm tree and the sound of a demonstration against austerity outside
the Portuguese Parliament. While, on one side, the palm trees are being
cut because of the red weevil plague affecting specific types of palm
trees brought from African ex-colonies, the demonstrations against
austerity, on the other side, happening in southern European countries
like Portugal, Spain and Greece, considered as toxic assets for the EU
and identified as the responsible agents of the economic crisis. The two
events find a parallel in the film, creating a connection between
natural and social systems.

‘The Opening Monologue’ (2018) is a circular, nonhierarchical narrative,
a flow of words that try to resist the colonizing forces of sound,
language and image. Written as a poem, the narration of the text is made
by a manipulated voice, somewhere between human and machine, layered by
a variety of sounds reminiscing of ambient tracks, political
demonstrations and a red carpet event. The film is made of a selection
of GIF’s and found footage. The speech is directed at the spectator
under a landscape of social conflict and alarming natural phenomena
perpetrated by human activity, under the savage neoliberal late
capitalist entrepreneurial culture, the spectator walks through a
narrative made by images seen many times before. The film is a tribute
to computer programmer [1], entrepreneur, writer, political organizer,
and Internet hacktivist [2] Aaron Swartz.

Both films reflect the artist’s ongoing inquiry into binary Western
narrative and the colonizing forces and heritage of image and language
production. Using text as a way of re-shaping and breaking these
structures, Barateiro’s films discuss the traps of late capitalism,
neoliberalism and algorithmic fascism, all of them formed by scientific
modern logic and economic models within a decadent and belated idea of
progress.