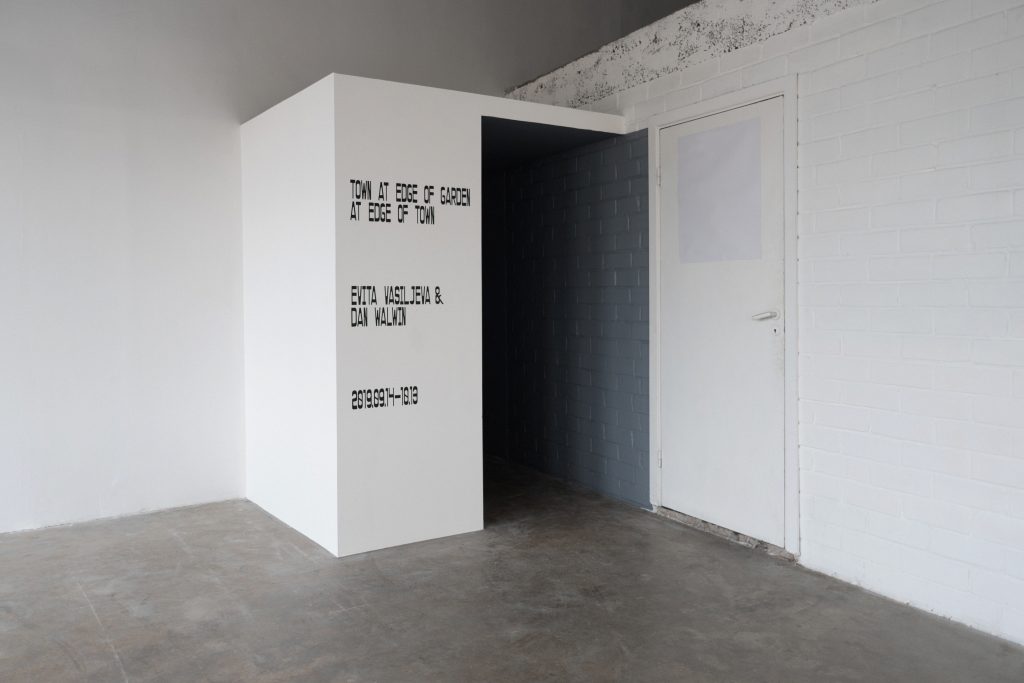 “Town at Edge of Garden at Edge of Town” is a duo show by Evita Vasiljeva (LV/NL) and Dan Walwin (GB/NL) which will open at the premises of POST Gallery in Kaunas. Even though the work of both artists is characterized by distinct artistic language and their work is exhibited together for the first time (as well as for the first time in Lithuania in general) in the exhibition it intuitively coalesces into an integral narrative, establishing an allegorical relation between architecture and nature, reminiscence and expectation.

Evita Vasiljeva produces sculptures which via their materiality and composition tends to be both — fragile and brutal. Usually of a large scale, they are built from materials intrinsic to modernist architecture, such as concrete or metal beams used in the construction industry. Despite all that, her pieces are almost ethereal and decisively temporal: after the exhibition is over, they are dismantled and allowed to fall apart. Therefore, a further aspect of manual labour comes to the fore and the sculptures themselves become a part of an endless stream of Vasiljeva’s artistic practice — neither truly finished, nor already really disintegrated, they balance on a fine line oscillating between something that already was and something yet to come.

In his multifaceted practice, Dan Walwin weaves together aspects of video and installation art, creating a peculiar landscape in the exhibition space which serves as a backdrop for a potential narration. Hints of architecture in his work reveal themselves as elemental and independent of human will, whereas aspects of nature invade them as if disavowing anything covered by the word “natural”. This uncanny relation is further cultivated by a fragmented gaze of the camera which deftly avoids lineral narration. Thus, Walwin manages to create a dynamic but also monumental space filled with both melancholy and hope.

“Town at Edge of Garden at Edge of Town” is foremost a collage produced by both artists in which constant repetition allows new rudiments of meaning to emerge.

We cordially invite you to the opening this Saturday, 6 pm after which we will celebrate with a party featuring a live electronic act by ADAS LIVE and a DJ set by Ziggy Q.

This exhibition is organised by P/////AKT and Audrius Pocius in collaboration with POST Gallery.

The organisers of this exhibition are grateful to Stikloporas Inc. for their generous support.