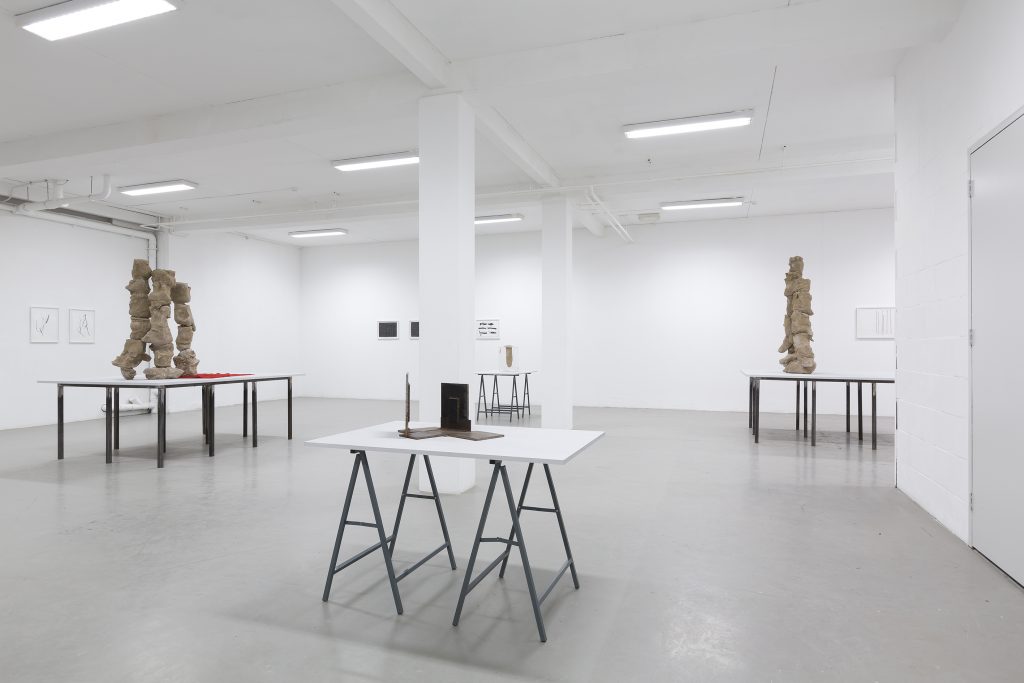 The work of Rein Dufait evolves around the nature-culture contradiction, a contradiction he means to undo. The process of making and growing is elementary in order to conceive a work (an idea). The labour remains visible, giving breath to the works and allowing breath to flow freely; he brings the work form the maker to the viewer, transforming it from a work into a living thing.
Just like time is visible in nature, it is in this body of work. The works seem delicate and light, although the materials are sometimes heavy and sluggish. The artist has the aptitude to add a sense of cheerfulness, or better, joy to the forms. A will to live and a lust for life. As a result, the works are not static, but enlivened by the methodical labour and correspondence to natural shapes. Both next to and inside nature he creates a world of his own where the objects are asking to be transformed precisely like this. Make it new. What wasn’t, once it is shown, becomes the evident.

A week before the opening, the only things visible were two stacks of wooden casings on top of two large tables. Inside, the freshly cast concrete sculptures were drying, to reveal themselves when the casings and sand in which they had been cast, layer upon layer, would be removed. Rodin comes to mind, but only briefly and somehow in reverse; a negative to his positive. These sculptures weren’t already pre-existing; they are the result of digging and being dug-up, an archaeology of thought and process.
The starting point for this exhibition was a rather conceptual exercise into the nature of sculpture and a way to think about and deal with connections, volume and space, while simultaneously acting upon the behaviour of the materials used – Dufait already experimented with sand as a mould for casting concrete at the beach of Ostend, when he found himself without a proper studio for making larger works, and the more stable conditions at P/////AKT allowed him to research its sculptural potential more extensively.
The sand, which is both pliant and firm, offered a direct way of creating tunnel-like shapes by only using one’s hand and arm. Within the context (or confinement) of the casings, the variations are limitless and new choices can be made with each new layer. The outcome both resembled and not resembled the mental picture on which these consecutive acts, still aesthetic decisions in a way, were based. Now that the casings and sand have been removed, the sculptures are exposed to another context and a different set of laws; to be reassembled and to be part of an installation.