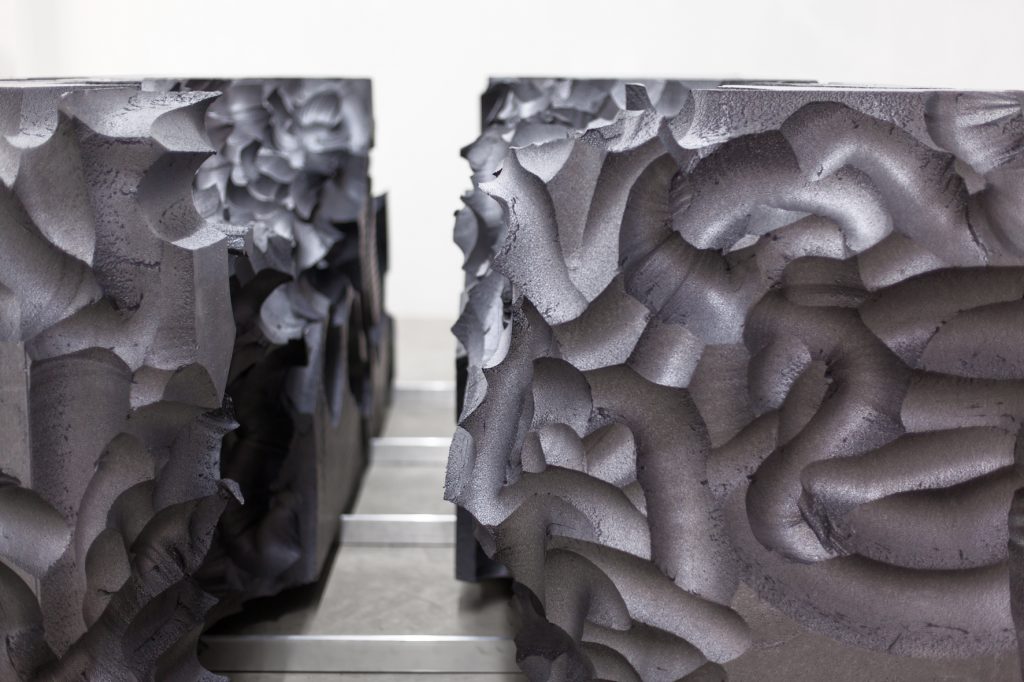 Paul Geelen’s project, Chance Encounter, stems from an archaeological find a farmer discovered in 1877, when he was ploughing the fields in the countryside around Piacenza. The object, dubbed ‘Piacenza’s liver*’, is a bronze sculpture with Etruscan inscriptions depicting a sheep’s liver and was used for reading the stars.

In the display in Barriera exhibition space, the artist created his own life-size version of the Etruscan liver and opposite is an actual sheep’s liver lodged on a cooling surface specially made to preserve it.  The two objects speak of two, only apparently known, realities.

If, on the one hand, we know what the origin and use of Piacenza’s liver are, on the other, we may wonder how far our knowledge goes. Can we really interpret this object the same way as those who made it? And also the real liver. An organ we possess, which yet remains concealed.

To these two objects Geelen adds another ‘known’ one: for the first time, he carved two black polystyrene blocks, two parallelepipeds. In his practice, the artist indeed employs a new material he has not used before in every exhibition. And so the polystyrene solids, cut with an incandescent blade, reveal residues that are charged with meaning. Almost as if they towered over the solid mass of the two parallelepipeds, whose shape recalls the two brain hemispheres. The ‘noble’ organ, Plato reminds us, that communicated with the rest of the body through the liver’s reflecting and shiny surface; a liver, as we have seen, that is used to see into the future. The artist further evokes this concept through the sound effect of a passing train: sound is movement,  the prime condition for the future.

DRAWN ONWARD is an exchange project between P/////AKT in Amsterdam (NL) and Progetto Diogene in Turin (IT). Both organisations operate on a non-for-profit basis and are interested in establishing a dialogue with emerging artistic talents. The aim of this collaboration is to share audiences, networks and experiences and to support and promote the work of artists on an international platform.