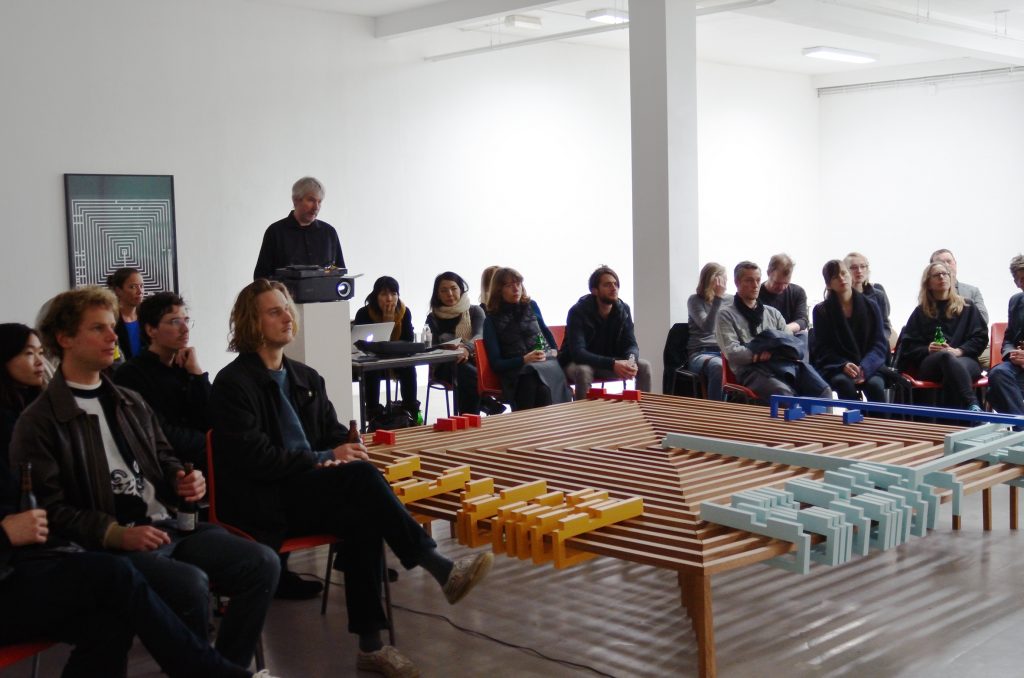 P/////AKT’s 2016 program focuses on the conceptual legacy of Marcel Broodthaers’ 1964 work Le Pense-Bête and its relevance in current discourse. P/////AKT has outlined six aspects of this keywork, each of which comprises a solo exhibition, a public event, and an essay.

Koen Brams – M.B., reproduced
Interviewed by the Belgian art critic Freddy De Vree Marcel Broodthaers once said something very remarkable. De Vree asked Broodthaers whether it is true that he is always afraid and tensed when being put in front of a microphone. Broodthaers answered: “Yes, because I know that what I say will be reproduced and I won’t be able to keep it for myself”. Which picture would we get from Broodthaers while only referring to audios or audiovisuals which he didn’t control? Koen Brams proposes to look and listen carefully to 2 audiovisual excerpts, featuring Marcel Broodthaers, which have not been catalogued or studied.

Koen Brams (°1964, BE) is a freelance researcher, writer and curator. He was the former editor-in-chief of the Belgian art magazine De Witte Raaf (Brussels (BE), 1992-2000), former director of the Jan van Eyck Academie (Maastricht (NL), 2000-2011) and the initiator of The Mobile and Temporary Studio for Research and Production (2014-Š).

Daniel Vorthuys – Making Screen Doors for Submarines
Quisquis poeta sit, stultus est. Musings on vanity, masculinity, lowliness. All things Catholic, full of taste. Poetry of Mass. Poetry of the plebs. From an artist’s dalliance with success to the goading arbiters of form and shape. Economic honesty: the Self-deprecatory: No reason why I shouldn’t have my share of the opportune, make a wager. Spot the canary out of the coal mine, cash in before the going gets tough and unobtrusively be on my way.

A presentation of miscellaneous poetics. From the coign of vantage of Broodthaers and his Poiesis. The presentation’s starting point: Why I too shouldn’t, after years of toil, fill my pockets, earn some praise [trans. of 1964 Broodthaers title of show]. Why I too shouldn’t paraphrase Broodthaers, risk falling off my high old horse? From abrasive honesty to salacious ingenuity, a look into the Ars Loci, the conditions of labour of some poetic heavyweights. From Celine through Bukowski to Mike Kelley – touching upon an economy of literary acumen.

Daniel Vorthuys makes performance-installations, writes criticism and poetry, presentations etc., which he then recites, performs, enacts. He studied literature at the University of Amsterdam.

Museum of… presents L’Art pour L’Art
L’Art pour L’Art is the first Museum of… edition and publication. It is based on Oil on Canvas, a series of paintings – art books of which the content can no longer be read because it is covered in oil paint – by P/////AKT-alumnus Rob van de Werdt and were exhibited at Museum of… at its previous location (39.604271,-8.325293) in 2014.

The edition consists of sixteen handmade books, each of which is “containing” a selection from the series as dustjackets, while its pages are blank. Form and content change places and the work functions as a space, carrier and object in one. The reader or viewer is at liberty to interpret, reformulate and rearrange things according to his or her own insights. The publication (200 copies) however, will have to make do without a space or a carrier.