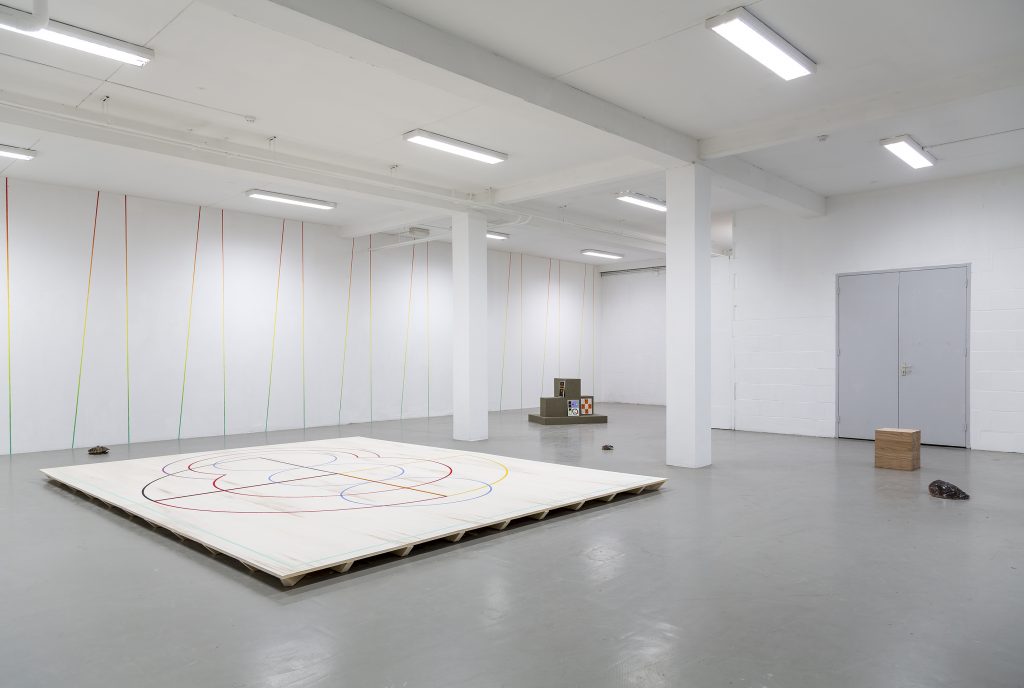 For his exhibition Little Cherry Virus, artist Kasper Bosmans (Belgium, 1990) draws from a multitude of sources, the first one giving the project its title. Each strand of investigation is incorporated within Bosman’s unique visual language and translated into paintings and sculptural ensembles.

An intuitive researcher and playful gatherer of material, the artist collects and transposes into his work formal elements and anthropological principles intrinsic to the studied phenomena, thus opening up a realm of meaning that surpasses them whilst celebrating or simply acknowledging them. What ties together the three investigations or anecdotes that lead to Bosmans’ new ornamental installation are the trans-historical dialectics between nature and culture.

1. Little Cherry Disease occurs in both sour and sweet cherry trees and is caused by the Little Cherry Virus (LChV), globally spread through ornamental Japanese cherry blossom trees, which are latent carriers of the virus. LChV is spread by the Apple Mealybug (Phenacoccus Aceris, or Wolluis in Dutch). Apart from discoloring the leaves with purple edges and spots, the virus causes the fruit to taste bland and look pale. As the name indicates, the most striking symptom is the reduced size of the cherries, which in an infected tree will reach only up to 2/3rd of their original size. Rigorous logging of the entire infected orchard and systematical replacement with more resistant European trees is the only known remedy as of yet.

Although the history of the cherry tree in Europe is contested, it is commonly assumed to have been imported from Asia, making it –like many agricultural products– the hybrid result from both cultural and natural historical processes. As the ornamental species imported in colonial times were brought in to satisfy new visual tastes and bourgeois ambitions, the Japanese cherry blossom trees are exemplary for the latent dangers and unexpected impact that imported elements of taste and fashion carry with them.

For example in Sint Truiden, the rural capital of the Belgian fruit agriculture business, which is dependent on spring blossom tourism and fruit production, Little Cherry Disease causes serious problems. Farmers faced with infected orchards are caught between an economical necessity to improve their harvest, and a wish to preserve the historical landscape of high-stem trees species. Destroying the site of their livelihood and replacing it with more profitable low-stem species is not a decision taken lightly, especially with local tourism interests are at stake as well.

2. The Amish, a group of traditionalist Christian church fellowships, lead a sober and retreated life in rural areas of the U.S., mainly Pennsylvania and Ohio. They have a longstanding tradition in woodwork, a craft they say keeps them close to nature and Jesus Christ, who after all was the son of a carpenter. When a building is erected within an Amish community, the men, women and children of the household write their names on the wooden pegs that hold the construction together. Such a pagan ritual is a rare find amongst the Anabaptist churches, yet speaks of their firm belief in so-called family values. By means of transubstantiation, the immaterial value of family ties is materialized in the pieces of wood that keep together future dwellings.

This tradition follows the laws of J. G. Frazer’s sympathetic magic, in which the representation or similar recreation of a desired or revered phenomenon is believed to have a direct connection with that phenomenon. If one desires a strongly connected family, one needs to make sure the joints of the house this family lives in are closely related to them. From an anthropological perspective, naming the wooden pegs after family members charges these structural elements with social significance.

3. William Penn, born in 1644, was a British colonial real estate entrepreneur and founder of the state Pennsylvania. Penn was a Quaker and a convinced pacifist who happily left behind the religious intolerance of his native England. In 1683, under an elm tree, Penn forged a peace treaty with the chief of the Native American Lenape Turtle Clan named Tamanend.

Marking the site of the treaty, which endured for almost a century, was a great elm tree that stood in what is now a neighborhood of Philadelphia. In 1810, the elm fell during a storm, and its wood was used to make a series of 8 small wooden boxes and 2 chairs for the politicians, magistrates and other powerful men in Pennsylvania. Soon, many were claiming to own objects made out of or containing pieces of the original elm tree, creating a multitude of relic-like artifacts the true origin of which could never be traced, yet which emphasize the way man interacts with his own history and natural environment.

P/////AKT would like to thank Mondriaan Fonds, Ammodo, Gemeente Amsterdam and Stadsdeel Oost.