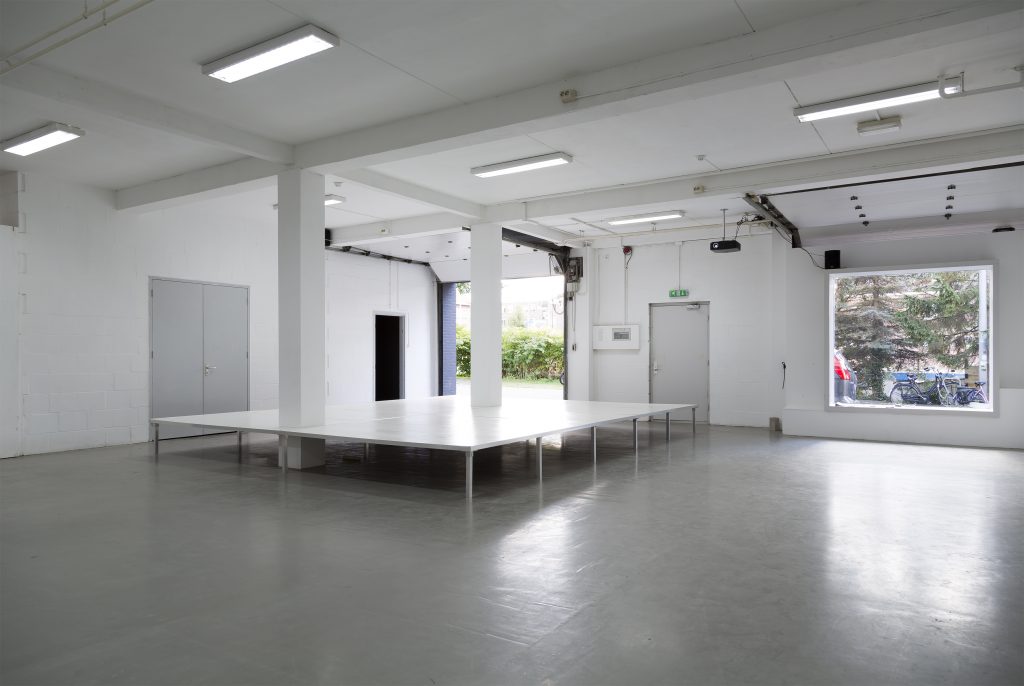 “The Government maintained that the murder of a prostitute at the hands of a customer is not considered domestic violence due to the absence of bonding between the perpetrator and the victim.” – says the voice of the narrator a few times a day. This is one of multiple ways Encapsulated music or/and script for Empathy, a dismantled opera piece by Claudia Pagès, can emerge from the shadow after the window of P/////AKT is opened and Burnout by Ulijona Odišarija is bleached by the daylight, which slowly fades away.

Things in this exhibition are on the move, which depends on the endless switch and the split between a the narrator’s voice and flesh, the garage and the gallery space, the screen and the wall, the shipping pallet and the stage, the vapor of Burnout coming out of the car tires screeching to a halt and the dreamy scenery of clouds.

During the exhibition both works by Pagès and Odišarija are constantly present, although one of them enters the stage as the other moves out of focus. The use of their surroundings’ physical properties results in a choreography tied up with the space’s particular timing and tempo, in an attempt to refuse the authority of a stable shape and order. The aspect of disembodiment is in the work of both and so makes the distance as well as the immediate contact doomed to failure.

With Empathy and Burnout we celebrate fluidity and the perfection of the mundane; the moment of emptiness and expectation, before the new character enters the stage; the idea of absence, which always goes together with the moment of construction; a confusion between the setting and the shadow of the moving figure and a duo and a solo at the same time.  Nevertheless, it is a dedication to Amsterdam’s economy of drugs and tulips; the mastering in between the void and surplus and the impossibility of entertainment in its own right.

Claudia Pagès (b.1990, Barcelona): the main focus of Claudia’s investigation is the construction of organizational forms and how they affect to social interactions and human relations. Her work tends to analyze the cultural capital, collaborative environments, liberal workers and their representation with the aim to explore topics as power relations, feelings of belonging, economies of the body and desire.

Ulijona Odišarija (b.1984 in Vilnius, Lithuania): is a photographer, video artist and dilettante composer. According to Odišarija, she is looking for a moment when recognizable things loose their purpose, like a word repeated many times in a row loses its meaning and becomes a sound. Her practice often embraces the margins of popular culture.