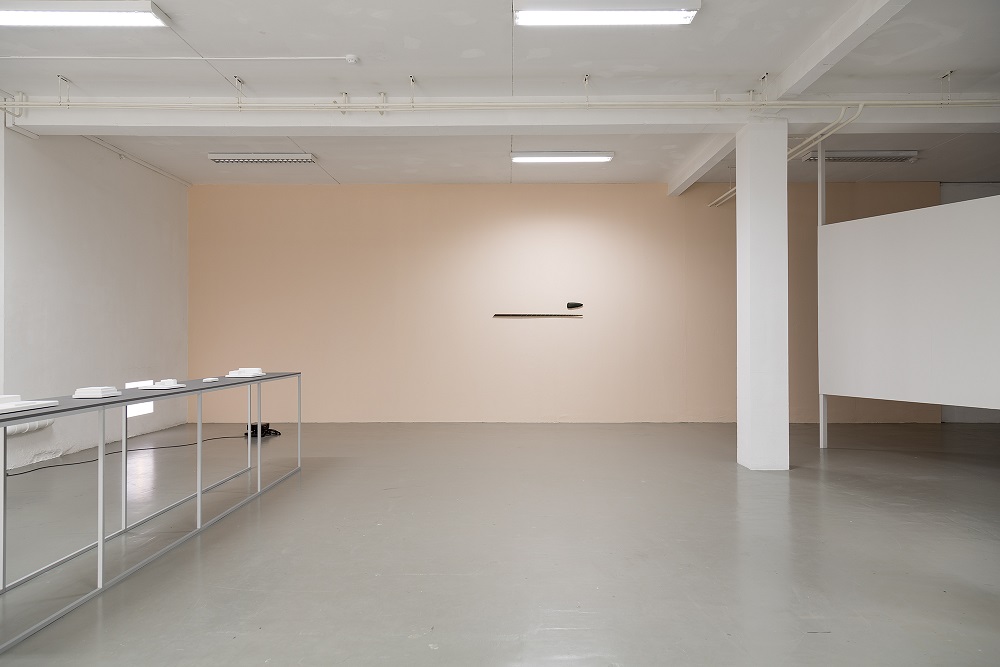 Astrid Mingels starts working from the objects and utensils surrounding her. Her practice consists of an investigation of these objects and their value. Like the title of the show – Unfixed Exchange – the works in the show function within the system of speculative currency. With the transition from the gold standard to the dematerialized monetary system of ascribed value we have made room for an economy based on speculative growth.

By bringing together seemingly unrelated objects, she associatively looks for meaning by creating a certain order. By combining objects and materials she aims for an outcome of more than the mere sum of their parts, and attempts to add a surplus value, thereby employing the rhetoric of the economic system and its marketing tools.

Although her installations, including the video works, have a strong material presence, many of her sources derive from the digital and the online world. The internet is an important source of information and inspiration, which are then translated into physical objects. These material objects will return to an immaterial state in order to circulate in the virtual world. This aspect of her work relates to the simulacrum, a term introduced by Jean Baudrillard to describe the phenomenon of the copy without original. Like for instance a plane crash, a simulacrum is an image of something created not by seeing the original, but by something we have got to know though the media, which, by its nature, are self-imposed. In this sense Astrid Mingels´ works go beyond the point of the authorship of the original, resulting in pieces that could be considered both artifact and meta-object.

Her works have one foot in the world of art and (cultural) heritage, and one in the realm of economy. By presenting her works alongside with bought and found objects, she incorporates the aesthetics and modes of display as used by ethnographic museums. In her practice she approaches her subjects as commodities, and often displays them as such.  Astrid Mingels undermines the classifications of objects and artifacts by era. She would easily display a hand-axe or a spear next to a series of objects in porcelain-plaster that are reminiscent of .Modernist architectural models; of an oddly familiar shape and size, and, upon closer inspection, turn out to have been cast from Apple-products´ packaging. As the ultimate symbol of contemporary commodities, these objects have taken over the role of the mediaeval hand-tool. With her mode of displaying everyday objects next to ancient utensils Mingels’ work process could be described as archeology of the current age.

Thanks to VSBfonds, Stadsdeel Oost, Gemeente Amsterdam and Stichting Stokroos. Thanks to Caldic Collectie, Wassenaar for the loan of the work Introverted. The production of new works is supported by Outset Netherlands.