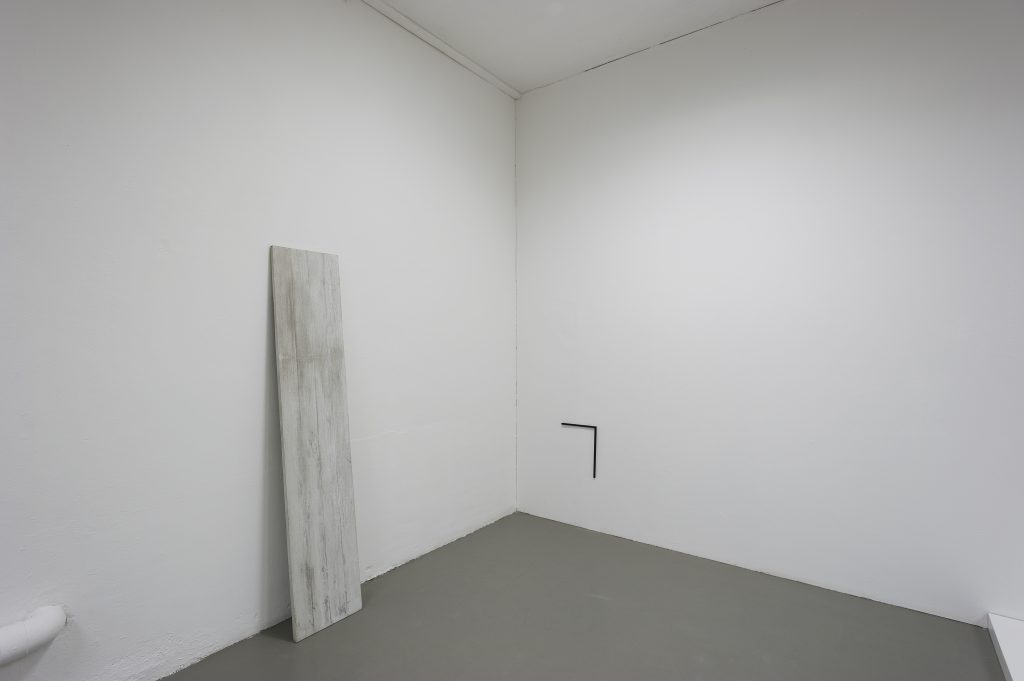 Melanie Ebenoch’s installation I recently dreamed we shared the same thoughts is the first of three exhibitions at P/////AKT for the Irretraceable Urge series, which will continue until the summer with consecutive solo projects by Jean-Baptiste Maitre and Thomas Raat.
Ebenhoch’s contribution to the series consists of several interconnected works that are all generated from Dual, Marc Camille Chaimowicz’ 1992 prototype for a chair.

Her fascination for the chair lies in the idea that it’s –as she calls itcompletely self-referential. As it can be used in two positions (vertical for an active seating position and horizontal for reclining) it seems to be engaged in an interior dialogue, indicative of both working and sleeping, thinking and dreaming or even a psychoanalyst-and –patient relationship.

She believes that as an artist she should orientate herself not so much within, but rather through the canons of traditional disciplines, meaning that she allows herself to develop her conceptual and theoretical notions from the intrinsic value achieved, and media/language used by predecessors. The choice for such a starting point remains of course quite personal and Ebenhoch’s working method is in fact not quite as calculated as it might appear on first sight, especially upon encountering her highly formal works.

Abstraction to her is a way of creating a story, growing from an intuitive fascination for a certain work –its material and contextual properties, quite often an existing design object. Such an object, the Chaimowitcz chair in this case, is thoroughly analysed and dissected on the level of its cultural and anthropological meaning as well as its physical structure and historical production process. In the resulting work the original source may seem to have disappeared, dissolved into graphic and systematic renderings which are then again used as a basis for the construction of abstract elements, shapes and patterns executed in different materials.

This missing reference however, turns out to be as crucial as any other aesthetic decision about a final piece or installation setup. The research on a certain technique becomes part of the shape, materiality and general character without being literally referred to. A chair is transformed into a newly conceived design object: a carpet, which more or less forms the central piece of the installation at P/////AKT. Accompanied by other works, in concrete, wood and steel -all of them based on the same constructional triangular shape of the original and all expressing some of its characteristics- it relates to the process of production, reproduction and transformation itself as well as a way of storytelling. Just like the absent original, the pattern is self-referential: a repetition of shapes and the act of making with no beginning or end to it. While the referentiality thus remains abstract and unfinished, it generates tension between pre-linguistic experience and the desire to understand.