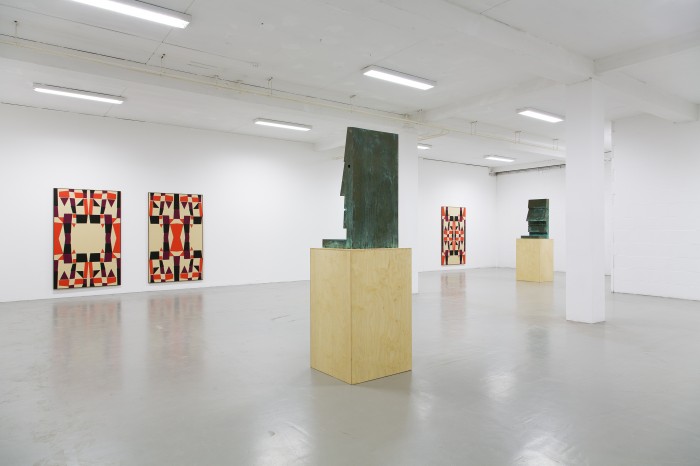 In his recent works Thomas Raat uses the aesthetic concepts of what he calls ‘slipstream’ Modernism: the point where the radical  aspects of the Avant-garde turn into an apparent convention and where the intersection between form, utility and history becomes paramount. Raat is specifically interested in the notion of the ‘true-false’, the substitute or actually the value of the residue, which he researches by appropriating book cover designs, public sculpture, advertisements and other sources of applied art and design.

The solo exhibition Self and Others is based on the repetition and doubling of images and focuses on the aesthetic use of symmetry, both in old and modern, Western and Non-Western cultures. The show investigates the possible relationship between the use of ornamental design seen in Folk art and African art as well as the origins of abstraction in Modern art. For most of the works in this show ornamental designs, taken from book covers published and designed in the 1950s—the period in which the modernist language was actually being applied in everyday life, are transformed into painted patterns that are reminiscent of African tapestries. In order to create such patterns, Raat is using a method –of repeating and mirroring a given original image- that he has derived from A Handbook for Flat Decoration (published in 1927). The subsequential act of  ransforming the resulting compositions into paintings starts out with a carving process, for which a nail or sharp piece of metal is employed to manually cut out lines in the surface of a wood board as precisely as possible. These grooves are then filled with ink and after washing the board a black-line drawing appears. Finally the colors are applied in a kind of “painting by numbers” action.

Another part of the exhibition consists of two sculptures that are quite archetypical in their design. Made out of wood, coated in bronze and finished with a patina, they appear to be neither ‘real’ nor ‘fake’. They might just as easily refer to Easter Island statues as some sort of middle-of-the-road art in public space. Or just props or models made to look ‘authentic’ by their oxidized surface.

The usual possibilities for reading, recognizing and interpreting the cultural and historical value present in these works are consciously left open, replaced by new chains of interlinked statements which have their own intrinsic logic. To be understood associatively and never by analysis alone.