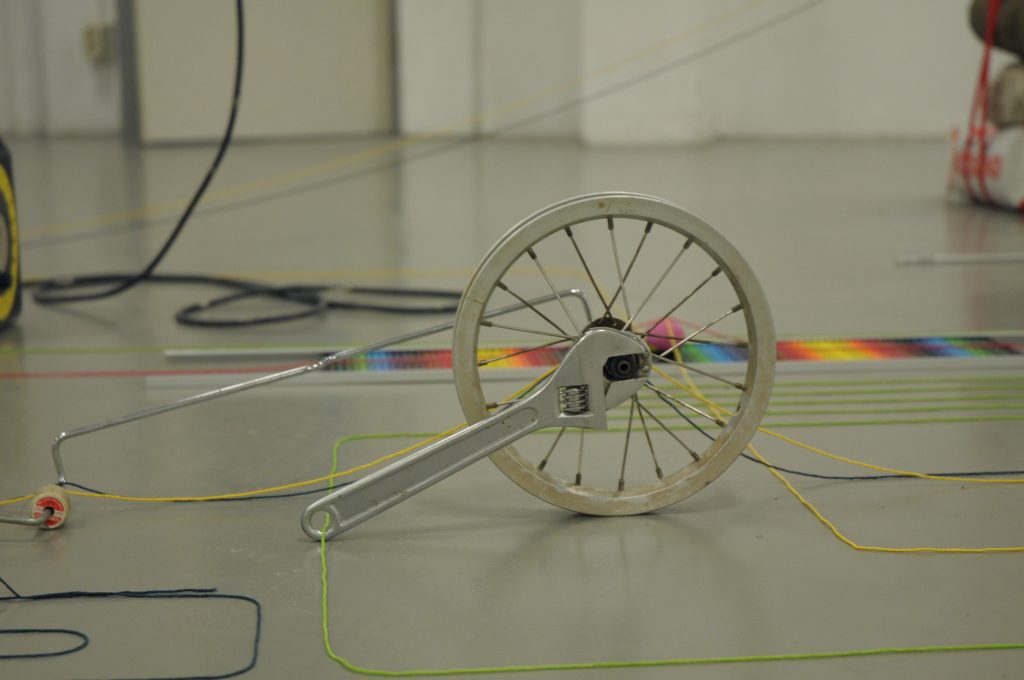 Sybren de Boer often makes space filling installations,  creating a parcours by combining and connecting all kinds of every day objects. He is mainly interested in the moment when meaning only just starts to take shape, in the liminal situation before a doodle turns into a drawing, absent mindedness results in a clear train of thought or a random act becomes a consious decision.

It is an in between state that has no particular beginning or ending, that actually precedes awareness; allowing things to be quite fluid and ready to become something else.

These set-ups are constructed as a form of (non-verbal) communication, which in a way conveys a fixed reality of the ‘things themselves’ that is less abstract and less negotiable than the artificial construction of language.  The question of what it is that is actually communicated however remains quite open, since these objects also lack the precision of language and are unable to explain what particular message could be derived from their temporary “semantic” context.

He starts from a seemingly down to earth basis: something which he refers to as the dialect of technical drawings, which he loosely uses as a framework for his arrangements. The schematic rendition of any apparatus might seem very practical, giving insight concerning its individual parts and how they are supposed to be assembled.  On the other hand this rendition only has an abstract relation to the real thing and the avarage, naive user of the manual gains no actual understanding of the how and why of its workings.

For De Boer this type of drawing is a means to create a new type of order and logic, combining different acts and gestures that are actually quite personal and intuitive. The ultimate aim is to connect the “absent minded work” to the elaborated version that comes into existence. In other words, to repeat the mental image without losing the original train of thought and to ultimately create a narrative where all thoughts are equally important in relation to eachother. Since there’s no clear beginning or end to the parcours, or even a schale of things to suggest some kind of hierarchy, both the individual parts and the sum of these parts might be seen as a sketch,a model or as a finished piece: a work that is coinciding with its precedent.