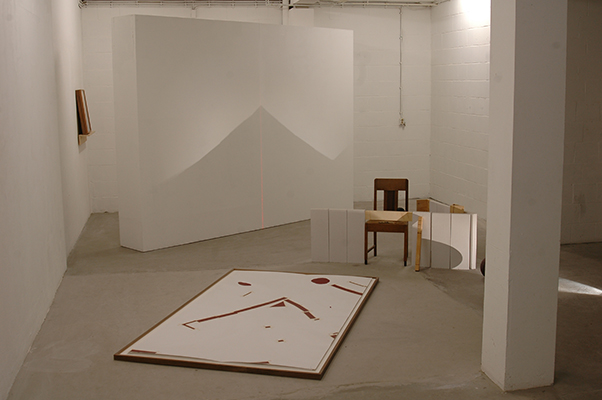 P/////AKT is happy to present a group show with 5 young artists and their recent work. This set-up was already devised in 2010 and has now finally found its proper place in between two series of solo exhibitions and within our program on art as a mental space.
The artists participating in The Spaces in Between find their common ground on the border of things: moving back and forth between the reality and artificiality, object and image, space and surface, substance and absence.

They create staged settings where things might or might not take place, both inhabited and void, leaving room for interpretations and expectations. Fleur van Dodewaard uses photography as a reflective tool, focusing on the medium itself -added to the 3-dimensional form it provides an ambiguous position: of the creator and viewer in one- but also as a means to investigate other media and to simultaneously question issues such as reproduction, authenticity and authorship. Her work mainly consists of serial photographs of objects and studio set-ups, borrowing methods and forms from art history through quotations of (abstract) painting and sculpture. The resulting images carry a very limited amount of visual information. This gives them both an abstract and concrete character. Since the images don’t carry meaning or function within themselves, they are open to be (ab)used by her personal interpretation. So, on a different level, they show an imaginary perspective, allowing the shapes and colours take on a performative character. In her installations Saskia Noor van Imhoff combines an encompassing perspective with a site-specific method. She incorporates sketches, sculptures, objects, photo’s, video’s and furniture as well as the works of others and things obtained from existing archives. By combining these elements in temporary and site-specific arrangements, she creates a different order of things; based on a more personal, intuitive and associative evaluation of the way different types of information are organized at large. Van Imhoff seems to confirm (or even increase) rather than simplify the complex process of making choices and connections, constantly reinterpreting modes of representation, the place of the work among other works and her own position as an artist. Erica van Loon is exploring nature and landscape as well as the process of interpretation and representation. Through her work she aims to generate a new experience, to make the tension between the natural and the constructed tangible and at the same time to create a new image: a research in image construction and presentation. Most of Van Loon’s works contain a range of media, mixing studio-based photography with painting and installation, bringing together sculpture, video and performative elements. In her recent video works she is bringing sculptural geometrical objects into the landscape, creating a new form of dialogue. Geometry, literally the ‘measuring of the earth’, is one of the most important pillars in western logic. A way of thinking which places a “grid” over the world as it were, to make it comprehensible. At the same time Van Loon is interested in the use of geometrical basic forms in various spiritual rituals and systems, through which mankind tries to grasp the unknown and searches for meaning. Charlott Markus constructs still lives and arrangements that end up predominantly as photographic presentations and as site-specific spatial pieces. She has a preference for left over items, elements that have been discharged from duty or that have been deemed worthless, especially discarded garments and textiles which are portrayed as abstract, layered formations placed in a perspective that makes it hard to gauge how they actually relate to space. Pictorial aspects such as shadow, colours and position are just as important to the result as the objects themselves, which take on a quality as protagonists in a poetic narrative. When exhibiting, Markus incorporates her photo works in settings that consist of architectural and sculptural elements, using carpet to “cut” to define and frame space. Daniel de Roo is drawn to existing places, which in themselves have to certain performative connotations, either by their function or through their status. For example a theatre stage has a particular load in its history and character, and is subject to projections one might bring to it. Moreover it triggers certain expectations, without which the mental picture of a stage is incomplete. Starting from the notion of an “existing” or “archetypical” original, he plays games with material, scale, dimensions and light, offering alternative, often impossible, viewpoints on the location as it should or could exist. As the work virtually envelopes and overlays its subject matter, describing it in a new language, De Roo aims at a mental reconciliation of two opposites: the pre-set expectations and the receptive, inquisitive frame of mind required for new experience.