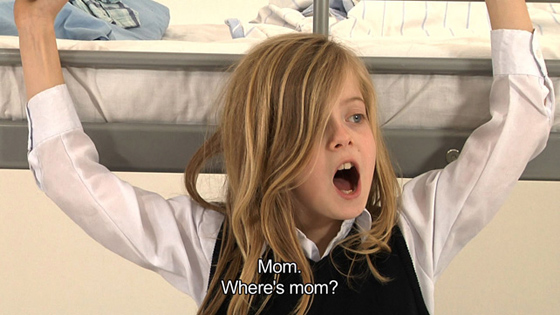 ‘Por algo será’ (there must be a reason)* is based on a personal experience of the Dirty War, the state terrorism during the military dictatorship in Argentina from 1976 until 1983. Actress Paula Juan Lima was six years old when the coup took place and her mother was arrested. Postma invited her to both write a script based on what she actually remembers, as well as to take on the role of director for the staged reenactment of her own memory.

The resulting two channel video  installation considers the way that memories and stories are constructed and become mediated, showing both off- and on stage material and interweaving images and events into an associative composition.

Esper Postma poses questions about the idea of objectivity and the way we organise our environment according to rigorous judgement and strict ways of thinking. Which values and meanings are being attributed to elements in our environment? How are these conditioned by the context that they are placed in? This can be a physical context, like architecture, or  a conceptual one,  in the form of for instance knowledge.
How does the connection between these categories find expression? He deals with these questions by using transpositions and displacements as a way of creating. By the recontextualisation of environments or events the viewer is being stimulated to relate to them in a different way.  He doesn’t only exhibit an image, but also a way of thinking that invites the viewer to reflect on it but at the same time provides an alternative.

* ‘Por algo será’ is a phrase that is often used to refer to the denial by the Argentine people of unlegitimate state violence. It was a common response when someone was arrested.