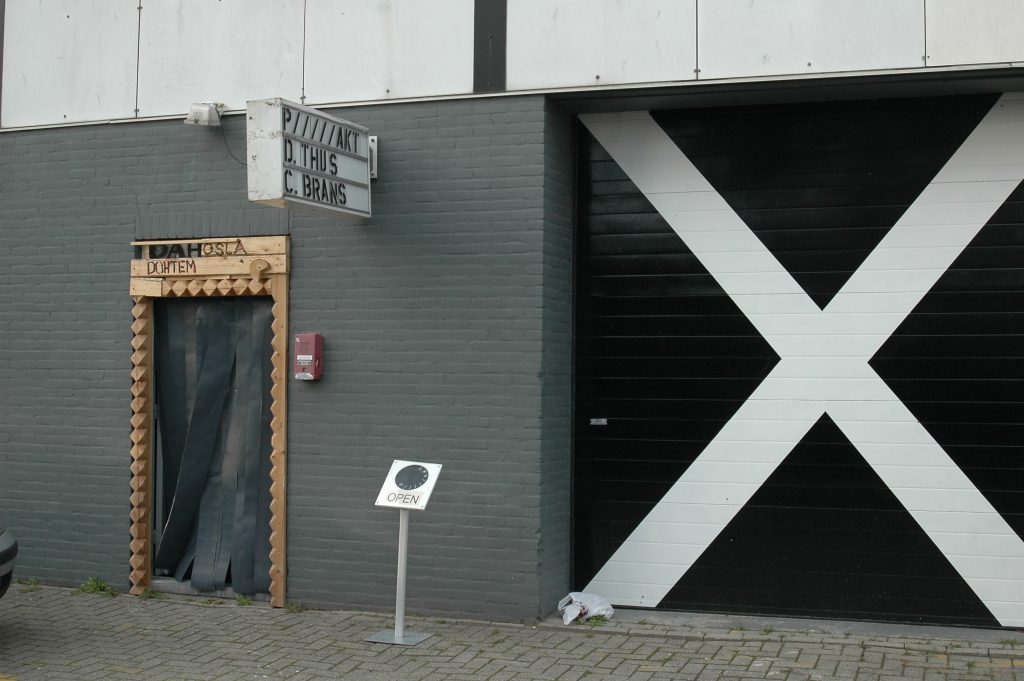 Derk Thijs often derives his subject matter from ancient history en is thereby striving towards harmony and universal unity. Over the past few years he has realized large scale installations; environments inspired by notions on humane and sacral spaces. For his project at P/////AKT has collaborated with Chris Brans, who describes his own striving towards universal values -derived from scientific principles as well as the banalities of everyday life- as “a friendly denial of reality”.

The exhibition, set in a space-filling installation consisting of 60 tree trunks, is the result of a collaborative preparation period during which both artists allowed eachother to infiltrate in eachother’s work:
Dah osla Dothem * “Snarb Sirhc & Sjiht Kred 1102 b.c. It’s the year 1102 b.c. when our hero Snarb Sirhc sets out on a spiritual journey to search for his long lost biological father. He is accompanied by his best friend forever Sjiht Kred who wields the sword of golden brushstrokes and is leader of the guild of forgotten egg-shells (whose purpose is to remember, uhm…). TKA\\\\\\\\\\P will be the final destination of their dwellings where they will need to set up a new heavenly Universe, supported by the 60 heavy holy pillars, in order to summon the silver-haired prince of wisdom: Bonnie Billy, who rides the stars on a red polka-dotted fantasy horse and goes by the codename HHH (short for triple H). With the help of HHH (short for triple H) they come up with a plan to complete their quests: Sjiht will use his golden brushstroke-powers to reconnect 1102 with the time before times. Using artifacts from his heritage from the Naalhgnaztliw-era Sjiht hopes to please the sages of the days of yore to remember the, uhm…. Snarb on the other hand, will point his fingers and visions towards the future; to establish a bridge to the year 20,0111. Using piles of his drawing-pile he makes a mountain on which he lays his head to create an angle in which he barely can see his father.” * Light, architecture and the broadest range of the thought-spectrum will be used to reach for This could result in Dah osla Dothem a placespace in space & time & TKA\\\\\\\\\\P