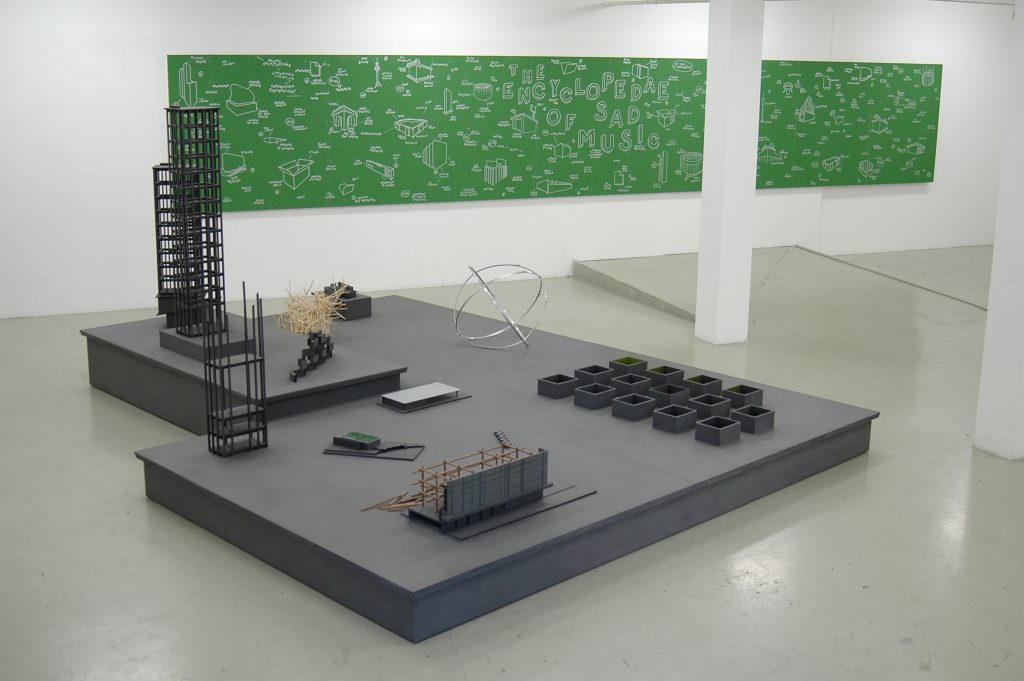 For his solo exhibition at P//////AKT Jean Bernard Koeman brings together a selection of new and existing works. As one might expect from the artist’s own words, the exhibition will turn out to be more than the sum of its parts: “I construct the installations as a parcours for the audience. An associative walk or tour, in which scale, form and meaning are generated simultaneously and on top of each other. The installations represent a “mental architecture”, meaning they are structures or buildings with human or thinking properties. They tell a story, invite to participate, doubt themselves, define or ventilate feelings or thoughts.”

The exhibition is dominated by a large, new scuplture work which is based on Jaques Tati’s film Playtime (1967). Playtime is best described as a satire on the horrors of modernist architecture; both a comedy and a drama, both an ode to its formal qualities and a dystopian vision of its effects on human existence. ‘DISPLAYS (A Willing Suspension of Disbelief)’ quotes a specific scene in the film (the protagonist is looking down on a huge beehive of people working in their office cubicles) in combination with models of other decor pieces, such as the hollow facades of the almost-actual-buildings that were built for the set: an entire fictional city as a vision of near-future Paris. As fiction becomes reality, it may not actually look as horrific today, now that working in cubicles is considered quite normal and the qualities of the modernist architecture are generally recognised. It is precisely the fine lines between fact and falsehood, and history’s way to alternately embrace or discard ideas, that the artist is using as a vantage point for his works. Often executed in a rather cool and aesthetic manner, they function as abstract platforms or containers that, on closer scrutiny, reveal a wider scope on things; an associative narrative that can be read by zooming in on the added details. In the case of Tati’s visionary masterpiece these notions of truth and lies, and the irony of it all, exist on both the level of the gargantuan set as well as the resulting film, in which extreme camera movements and perspectives are used as a means to philosophical reflection and emotional involvement. Koeman’s reappropriation, exectuted in dark grey mdf and glass plates, functions as a new staged setting, or rather an open constellation of ideas to be seen in a different light. As a whole the exhibition shows the artist’s admiration for great creative minds, which he is quite unafraid to ventilate. Moreover, he is systematically using his work as a credit to his sources and -through reappropriation into an abstracted, modular yet highly personal style- an open invitation to reconsider and reevaluate the capacity of their achievements. Another new work, ‘The Suprematist Guitar Ensemble’, is a sculpture hovering on the border of a black box and a building. An obvious and quite intentional reference to Malevich, whose achievements are resonating as “a small big noise” (abstracted, elongated guitar chords) on the inside. ‘The Encyclopedea of Sad Music’ (2008) is a monumental drawing in green paint and silver marker, consisting of images of storage-modules and architectural sketches. Accompanying these images there is a long and complex timeline with about 850 names of composers, musicians and bands (and some crucial dates) “that have all produced staggering, sad and heartbreaking music throughout the ages.” Besides these new and existing pieces Koeman is presenting two reappropriations of his own works, one of which is a customized version of Piero Manzoni’s famous work. ‘Socles du Monde’ (1993 / 2007) provided a seventh – democratic – addition, to the six versions that Manzoni made: an edition of 16 dvd’s that could cause any ordinary television-set to hold up the entire globe. The 2010 version takes on a more ephemeral quality as it is projected into the exhibition space, to be intercepted by the audience. Physically outside the exhibition space – in P/////AKT’s recently obtained annex: a small building on the nearby Cruquiusweg, part of an old railway structure that is maintained as an industrial monument- Koeman is showing a slide projection based on a photo work that he recently made as part of his exhibition ‘over de trouweloosheid van de wereld‘ (on the disloyalty of the world) at Lokaal 01 in Breda. One slide shows a new, reenacted version of Pieter Brueghel’s 1568 painting The Misantrophe. The second slide is yet another, more abstract version which focuses on Brueghel’s phantasized scenery that can actually be found in the reailty of contemporary Holland. In the end there is no final conclusion to be made; whether human nature proves itself to be fickle and disloyal or likewise by having an unaltered capacity for imagination, leading up to great ideas and theories.